Counselor Talbot is a human quest giver located inside Valiance Keep in the Borean Tundra. 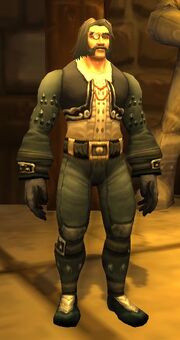 Counselor Talbot noticed Thassarian from a far when he came to the Valiance Keep. When Leryssa journeys to Northrend to ask about her brother, Talbot simply said that no one named Thassarian ever enlisted at the base. He sent after Thassarian, whom he told that he was the man he was looking for to lead the Unit S on a mission to destroy a Ziggurat, but the true reason why he chose him was to make sure he never returned from his mission. Thassarian eventually discovered that Talbot was in fact Prince Valanar and he defeated him.

Talbot is seen in Valiance Keep. He is an advisor to the keep commander, General Arlos, but his counsel seems somewhat suspicious; he believes the men of Valiance Keep are not capable of putting aside what superstitions they may have about their draenei allies, and tries to send the player away from the keep when he/she brings Cult of the Damned activity to the attention of the General.

If Horde forces attack Talbot, he will use three spells, named Soul Blast, Soul Deflection and Vampiric Bolt, all three are significantly more powerful than what should be expected from an npc his level. While seeming out of place,

[Empowered Blood Presence] explains the reason he has these spells: "Counselor Talbot" is in fact the San'layn Prince Valanar, the Scourge overlord of Borean Tundra.