Countdown to Extinction is the final chapter of the Exodus of the Horde campaign.

During the battle, the Darkspear trolls and the Horde managed to escape the Sea Witch and her murlocs.

Sunlight greets Thrall and his companions as they escape the underground lair and make their way back to the surface.

Note: When the quest is completed, this quest is also called "Trolling for Trolls". 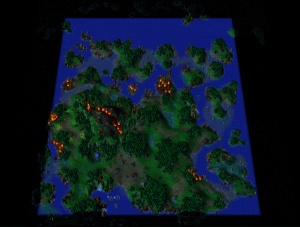 Sea Witch: "Land-dwellers! You have slaughtered my minions and defiled my sanctuary! Now, you will be drowned by the wrath of the tides!"

Thrall: "You'll have no more sacrifices today, witch! Go back to the depths where you belong!"

Sea Witch: "Very well, your choice is made! The air you breathe now will be your last!"

Raider: "Warchief! While you were gone, the nearby volcano erupted! This entire island has begun to sink!"

Thrall: "How long to repair the ships?"

Thrall: "Then finish them quickly! We're about to have company! Defend the ships at all costs!"

Sea Witch: "Sail on, land-dwellers. Flee! The Dark Tide is coming to swallow you all, and once it begins, there will be nowhere to hide!"

Thrall: "I don't know exactly what the witch was talking about, but I do know that our destiny lies elsewhere. For now, we set sail for Kalimdor. That is where our future will unfold."

As Thrall escapes, he is chased by the Sea Witch and her murloc warriors. The repairs to his storm-damaged ships are not done and he must rally his forces to hold the line and protect the ships until they are repaired. Unfortunately, the volcano on the island is also erupting and the whole island appears to to be sinking into the sea. Some imprisoned trolls around the island are rescued to provide reinforcements against the Sea Witch and her warriors.

After defending against different waves of attackers the ships are finally repaired and Thrall's forces continue on to Kalimdor, beginning the Invasion of Kalimdor.