Court of Stars is a level 110 instance located in Suramar.[1] The entrance is in the Aetherium, down an elevator straight ahead from the main gate. Set within Suramar City, the dungeon is an instanced version of the north-eastern half of the inner city.

Originally released with Legion as a Mythic-only dungeon, with Patch 7.2 the dungeon was also made available in Heroic mode.

Even as Legion troops patrol the streets, casting a pall over the grand city of Suramar, the socialites of the Nightborne nobility continue to cling to custom and routine. On this clear night, the cry of revelers echoes through the chill air, as the largest mansion in the Noble District opens its doors for the grand gala. Rumor has it that Grand Magistrix Elisande herself may be making an appearance, in an effort to reassure several of her closest allies despite recent turmoil. 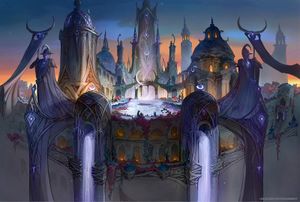