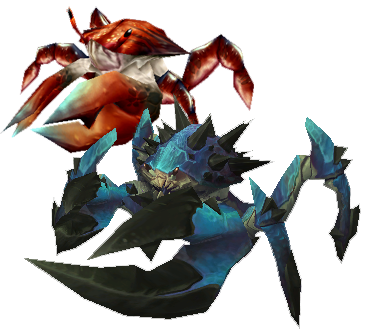 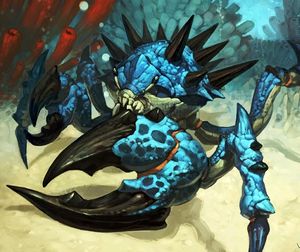 A sand crab in the TCG. 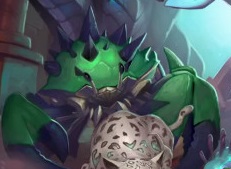 A sand crab as seen in a piece of Hearthstone artwork.

A crab (or a crawler)[1] is a (typically) small crustacean that is often found on beaches. Crabs have high armor, as the shell would imply. Crabs are typically neutral and ignore passers-by. They drop claws and meat that are used in cooking recipes (e.g.,

[Crawler Meat] for making Crab Cakes). They are usually found along the coastline, but can survive for extended periods of time away from the ocean.[2] Sometimes, they may appear as critters. One can even find tiny red lava crabs scuttling about in the Searing Gorge and Burning Steppes. Though few crabs were added during The Burning Crusade, they received more attention during Wrath of the Lich King, and Cataclysm, the latter of which introduced a second model of crab, often referred to as "sand crabs", after the name of the model used.

Some species have developed an advanced form of camouflage that causes their skin to appear translucent.[3]

Spineclaw crabs of Pandaria have existed for thousands of years and remain one of the continent's oldest creatures.[4]

The following crab pets can be captured in pet battles around the world: