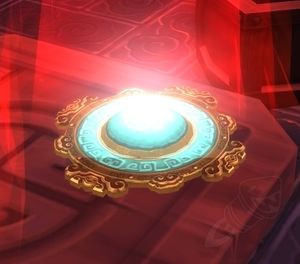 A Pristine Mogu Runestone on display.

The Cracked Mogu Runestone is a common mogu archaeology artifact, created from 50x

[Mogu Archaeology Fragment]. Up to one

[Mogu Statue Piece] may be used to solve this artifact. A pristine version can also be crafted.

Unlike "lesser races" that need schooling in the arts of magic, the ability was innate in the Mogu. From what is known about Mogu usage of magic, it is clear that their magic users did not fall into known categories, such as mage or warlock. Special emphasis was placed on flesh-shaping or spirit-capture magic. The strange residue of the magic that was imbued in this stone is difficult to understand by the modern races of Azeroth. Curiously, some of the markings around the rune resemble the Titan language.