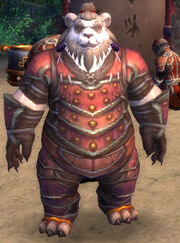 The members of the order traditionally wear red armors and robes.

The Crane Wing order[1] is the order of pandaren monks and priests serving Chi-Ji at the Temple of the Red Crane in the Krasarang Wilds.

They set up Crane Wing Refuge after fleeing their temple. Followers of Chi-Ji are also present at the Cradle of Chi-Ji.

Later their members helped in the defense of Valley of the Four Winds.

The Champion of Chi-Ji is presumably a member of the order.