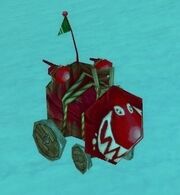 It can be looted from the

[Stolen Present], which is a reward from

[60G Daily] You're a Mean One.... Acquiring it in this fashion will not award the Feat of Strength

[Crashin' Thrashin' Racer] (in contrast to the

[Clockwork Rocket Bot], which will award its original Feat of Strength when acquired in 2011).

Prior to 2011, characters level 10 and above could loot this item from a Winter Veil Gift under the tree in either Ironforge or Orgrimmar.