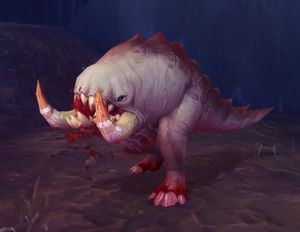 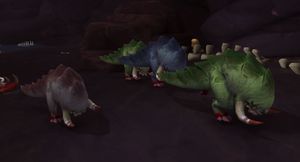 Crawgs are beasts found in Nazmir on Zandalar. They are mostly found accompanying blood trolls. The blood trolls create crawgs by corrupting the tadpoles of Krag'wa, the frog loa, with their blood magic.[1] Despite the corruption, he still cares about their safety even if he cannot remove the corruption.[2][3]

The horns of a crawg grow at a tremendous rate starting almost immediately after they are born, and is among the hardest of natural materials found on a living species.[4]