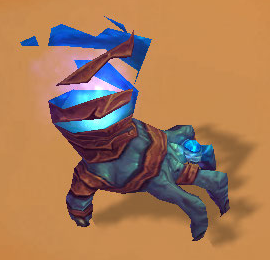 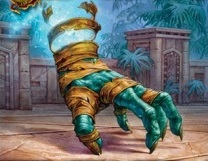 Crawling Claw is a rare archaeology artifact that requires 450 skill to find and 150 Tol'vir Archaeology Fragments to solve. Up to three

[Tol'vir Hieroglyphic] keystones may be used to complete it.

This appears to be nothing more than the paw of a small primate. A closer inspection shows that the hand has been dried by centuries of exposure to the sands of Uldum.

This appears as nothing more than the paw of a small primate. A closer inspection shows that the hand has been dried by centuries of exposure to the sands of Uldum. Still, you have no doubt that it is far from than meets the eye.

A legend among the tol'vir tells of a wicked djinn whom the Ramkahen sought to destroy. In an attempt to prevent his own death, the djinn tried to transfer his spirit into the body of a monkey. He was slain right in the middle of the transference, and only a fraction of his essence had moved over - only enough to possess the monkey's paw.

This is the only epic-quality companion pet obtained with archaeology and being Bind to Account. Unlike other BtA pets, it is consumed when learned.

Djinns, being air elementals, can only be permanently killed while in the Elemental Plane (in this case Skywall). Death in the mortal plane only sends them to the Elemental Plane. If it actually was a djinn as the legend says, perhaps he had some sort of time constraint that he could not afford the delay in returning to Azeroth, and thus trying a transfer was worth the effort. Of course, this is dependent on whether an elemental could actually do such a thing, or that it would really work.