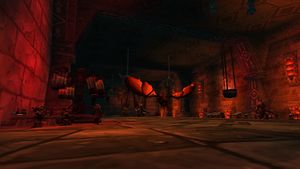 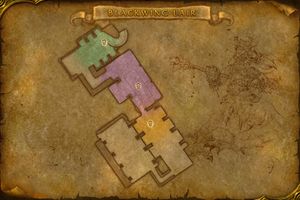 Area map of lower part. The northern purple and green rooms are where Firemaw and Ebonroc are often encountered 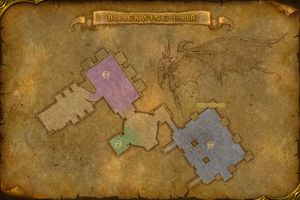 Area map of upper part. The westernmost purple room is where Flamegor is encountered, and Chromaggus is locked in the green room

The Crimson Laboratories are the rooms of Blackwing Lair between the Halls of Strife and Nefarian's Lair. The name comes from the label of the zone map where most of the labs are found.

After killing Broodlord Lashlayer in the Halls of Strife, lab packs of Blackwing Technicians, Blackwing Spellbinders, Blackwing Warlocks and the occasional Death Talon Overseer line the walls. The very first pack immediately to the right of the door guards the second of the two Alchemy Labs that were found in the Old World (before the Shattering). Up until Wrath of the Lich King, alchemists were required to be within range of a lab to make flasks. The first lab was found in the original Scholomance, in Ras Frostwhisper's room in the basement. The goblin technicians are also important, as they are the only source of Elementium Ingots, necessary for the crafting of

[Thunderfury, Blessed Blade of the Windseeker].

While clearing out the first room, keep an eye out for the first black drake boss encounter, Firemaw, who patrols the length of the room. Also near the end of the first room is the first Wyrmguard Pack of Death Talon Wyrmguards. In the second room, players find the second black drake Ebonroc, patrolling the semi-circular ramp to the upper room. At the base of that semi-circular ramp, guarded by another wyrmguard pack is Master Elemental Shaper Krixix, the author of the

[Goblin's Guide to Elementium]. Finally, in the upper room is Flamegor, the last of the three drakes.

Once the drakes are dead and the last wyrmguard pack has been defeated, players may flip the lever in the next room to unleash Chromaggus, the penultimate boss encounter of Blackwing Lair.

In the labs proper

In an unnamed chamber after the labs