Critter Gitter is awarded to players who use

If you are working on 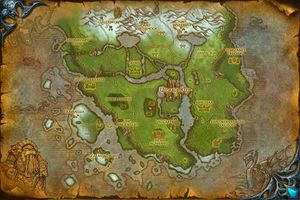 in Howling Fjord. For those without coords, it's the V fork in the road directly west of the Explorers' League Outpost. Use the

[Critter Bites] on the

When attempting this quest by itself, the most popular locations are the floating icebergs off the coast of Howling Fjord or Borean Tundra populated with Fjord Penguins or Tundra Penguins, respectively. Each populated iceberg contains over 15 birds, which stand still to make for easy targeting. A

[Water Walking] potion or ability, or

[Swim Speed Potion] can be helpful in reaching these icebergs.

The Terrorweb Tunnel in Eastern Plaguelands is also full of critters.

When attempting the achievement on Fjord Turkeys, the following macro may be helpful. Map the macro to your key of choice, then run around the flock of turkeys ([69, 64]

You'll need to get quite close to each turkey to target it rather than targeting an already controlled critter. Note that once a critter has eaten the Critter Bite, it changes from "critter" to "minion" and therefore is ineligible to eat another Bite. (You will get a "Invalid Target" message.) This is actually a good thing, since you don't have to worry about "wasting" a Critter Bite on an already controlled critter.