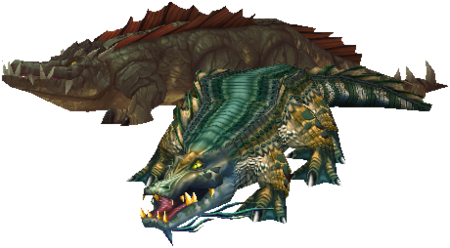 “Should you spy a mossy log / afloat in swamp, morass, or bog / toss a stone or take the risk / for it may be a crocolisk.”

A crocolisk (sometimes referred to simply as a croc)[2][3] is a six-legged, amphibious, reptilian predator found in coastal waters[4] that bears much resemblance to a basilisk or the real-life crocodile. 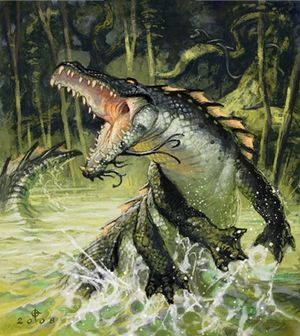 A crocolisk in the TCG.

A crocolisk in WoW: The Comic.

Archaeologists believe they may be descended from the diemetradons of Un'Goro Crater.[4] After studying the crocolisk species for several years, the famed angler Nat Pagle determined that baby crocolisks are mostly harmless.[5] Crocolisks are powerful amphibious predators common in most regions of Azeroth, attacking unwary adventurers sailing their waterways. Crocolisks are usually found near bodies of water such as rivers, marshes and lakes. They exist naturally in both fresh and saltwater environments, preferring to remain close to land. They are found in the Wailing Caverns, Durotar, Loch Modan, the Wetlands, Swamp of Sorrows, Dustwallow Marsh, Zul'Gurub, Nagrand, Netherstorm, Pandaria and even Stormwind City (such as the elusive Sewer Beast).

The crocolisk's hide and meat are prized by hunters, but the beast is ferocious and seldom taken by surprise.[6]

Rumors exist of very old crocolisks that have grown to enormous sizes. The beast known as Manglemaw's Mother, however, grew extremely large despite the fact that she can't have been over a dozen years old. This was due to the runoff waters of the Pools of Power flowing through the Valley of the Four Winds, which is also what allows the vegetables that the Tillers grow there to reach humongous sizes. According to Yan, "the odd giant crocolisk every now and again is really just a side effect".[3]

Due to the corruption emanating from Grim Batol, some of the crocolisks living in the Wetlands have gained poisonous bites.[7] 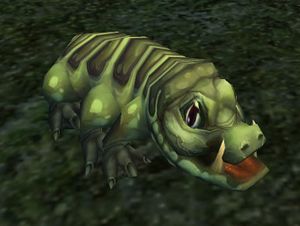 Crocolisks are a family of Ferocity pets and are tamable by Hunter starting at level 10. They can through use of their

[Ankle Crack] ability reduce an enemy target's movement speed by 50% for 6 seconds. This ability can be very handy in PVP, and may even have a few PVE uses. There are nine different skins available for crocolisk pets. Most notable is

Swamp Crocolisk, available only to Worgen, and the rare black crocolisk

Gorebite, who can only be tamed once summoned as part of the Uldum quest

Crocolisks are however not very popular as a hunter pet. They were known to make a hissing noise when they sit still, much to the annoyance of some hunters. This was removed, but first impressions didn't bode well. They became more popular after a model update in Cataclysm. 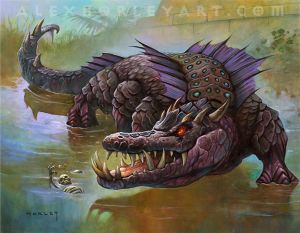 They are massive in length and covered in thick, rough scales that run from the end of its tail to the tip of its maw. Mottled green in color with yellowish fangs, the beasts are supported by six squat legs with webbed feet, each of which ends in short, black claws.

They are proficient swimmers, able to surge forward with bursts of speed that often catch prey by surprise. They prefer to feed on relatively defenseless prey, such as small, aquatic creatures or larger land creatures that flounder when crossing bodies of water. However, crocolisks never hesitate to defend their territory aggressively from trespassers. A crocolisk usually lies in wait, submerged near the edge of a body of water with only its eyes and nostrils showing. When it spots prey, it charges to the attack. It lacerates the victim until it bleeds to death, then drags the corpse back to its watery home. Crocolisks become stealthy while they are in the water. Further, a crocolisk can lie in the water with only its eyes and nostrils showing, and can hide as long as it remains motionless.[8][9]