He is also found inside Icecrown Citadel leading an attack force of Argent Crusaders into the Upper Spire and later down the hallway leading to Sindragosa's lair. 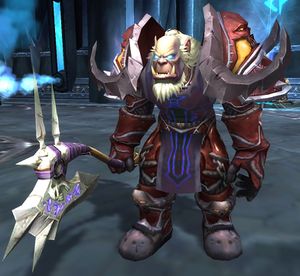 Entering the Upper Spire with teleporter
Our champions have lost much blood in the struggle to activate this Scourge transporter. We must be prepared to return the favor. Follow me, men!

Before the Frostwing Halls
Crok Scourgebane yells: Ready your arms, my Argent Brothers. The Vrykul will protect the Frost Queen with their lives.
Captain Arnath yells: Even dying here beats spending another day collecting reagents for that madman, Finklestein.
Crok Scourgebane yells: Enough idle banter! Our champions have arrived - support them as we push our way through the hall!
Sister Svalna yells: You may have once fought beside me, Crok, but now you are nothing more than a traitor. Come, your second death approaches!

During the Frostwing Halls gauntlet

Sister Svalna aggroed
Sister Svalna yells: Come Scourgebane, I'll show the Lich King which one of us is truly worthy of the title, champion!
Crok Scourgebane yells: I'll draw her attacks. Return our brothers to their graves, then help me bring her down!

Death
Vengeance alone... was not enough!

After Sister Svalna's death
I'll remain and inform Tirion of our progress. You must press on and bring down Sindragosa. Lok'tar, champions!

Scourgebane is very likely a name Crok took for himself only once his will was freed from the Lich King's grasp and he joined the ranks of the Ebon Blade (later the Argent Crusade). It is unknown what his surname was in life, nor who his relatives may have been (living or deceased).