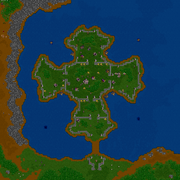 Cross Island and its defenders during the Second War.

The Horde besieged it during one of the missions of the game, and the region was later attacked again when the Horde of Draenor invaded Dalaran in order to get the Eye of Dalaran.[3]

Cross Island, where the Violet Citadel was built upon, was outside the city of Dalaran.[4]

In World of Warcraft: Classic Dalaran is depicted as a city-state on the lake's shore, rather than being on an island. Cross Island is not mentioned either in the novel Beyond the Dark Portal.

A stretch of land connects Cross Island to the lake's shore in Warcraft II: Tides of Darkness, however, this is most probably because there were no bridges included in the game.

In The Frozen Throne, the northwest portion of Cross Island may possibly be visible in two of the level maps (Misconceptions and A Dark Covenant). Although not clearly recognizable, it still seems to have remained cross-shaped, but other level maps mentioned below might suggest that its southern shore was transformed into a moat. It is possible that the southwest portion was seen during Under the Burning Sky, the southern portion was seen during The Siege of Dalaran, and the southeastern portion during The Ruins of Dalaran.