From Wowpedia
(Redirected from Crossbows)
Jump to: navigation, search 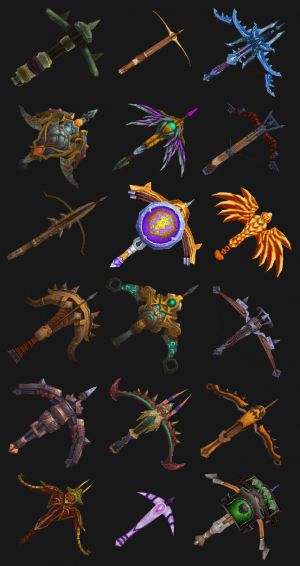 Different crossbows in World of Warcraft. Most crossbows will look rather mundane until level 60+. For each crossbow's name, click this image.

Crossbows are long-ranged weapons; a type of bow that uses a mechanically compressed and held bowstring. They tend to fire slower than bows, but cause more damage on a hit. They are similar to bows and guns in use. Character stats are applied the same way for each type, although the item stats will be different from item to item.

Crossbows can be used by rogues, hunters and warriors. Naturally, given it is a weapon, crossbows are used to cause damage. The different classes will however use crossbows a bit differently.

Rogues and warriors can wield crossbows, but they can't use any melee weapons when wielding one.

Hunters are perhaps the only class which "truly" uses crossbows; that is, uses them as weapons instead of just enjoying the stats. Before patch 4.0.1, which caused hunters to use focus instead of mana, there were crossbows made purely for hunters; one example is

[Truestrike Crossbow] which used to have intellect on it, boosting the hunter's mana. Given how hunters could have a greater use of a crossbow than rogues, crossbows were still considered to be hunter weapons.

As hunters use crossbows as weapons, the attack value of a crossbow becomes very relevant to them. The perhaps most important stat is the weapon speed which somewhat determines how much damage a weapon is capable of generating. The faster the speed, the more but weaker attacks - the slower the speed, the lesser but more powerful attacks. Generally, the latter is the most favorable. As mentioned on top this article, the weapon speed on crossbows is usually slower than on guns and bows.

The fastest crossbow in the game is the

[Frigid Crossbow]. The two slowest are the

[Ashjre'thul, Crossbow of Smiting] - the latter was one of the most powerful weapons in pre-TBC.[1] Notably, these two also are the slowest ranged weapons in the game as of patch 5.1.0.[2]

There are several ways to acquire a crossbow. Like all other weapons and armor, they can be:

There are also different ways to improve your crossbow: