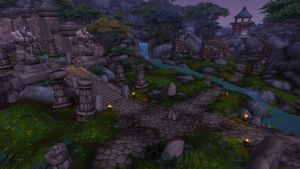 The Crossroads is the central subzone of Ashran, and the middle Tower of the Road of Glory. To the east, columns and steps lead up to Seat of Kor'lok, while to the west a bridge leads to Kings' Rest and the Marketplace Graveyard. To the north is the Tower of Volrath's Advance, while to the south lies Tremblade's Vanguard.

The exact middle point of the zone between Warspear Outpost in the north and Stormshield Stronghold in the south, all battles in Ashran start with The Crossroads as the contested Tower.