Crown of the Earth
Level: 9 (Requires 5)

Crown of the Earth is an Alliance only quest in Teldrassil, the night elf starting area. In this quest, players are sent by Corithras Moonrage to fill a vial with moonwell water from the moonwell near the Pools of Arlithrien.

There is another moonwell southeast of the entrance to Darnassus, on the shores of the Pools of Arlithrien. The Sentinels are having problems patrolling the area because of attacks and the growing ill-temperedness of the Gnarlpine furbolgs.

Be wary as you seek out the well, and keep your weapons close at hand.

At first the reports of crazed furbolg attacks were dismissed. Who could have thought that the peace-loving bear-men would turn to mindless rage? Yet another of the problems that plagues us here in our new home.

With the approval of the Circle, Staghelm and the most powerful druids grew Teldrassil, the new World Tree. 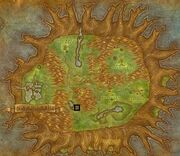 Corithras Moonrage can be found just south of the inn in Dolanaar, standing near the moonwell. Speak with him after turning in

[5] Crown of the Earth to receive this quest.

This moonwell can be found south of the entrance to Darnassus (follow the road west to get to the city entrance), just southeast of the lake in the subzone the Pools of Arlithrien. The exact coordinates are (42,67). Right click the vial in your inventory to fill it while standing in the water, then return to Corithras in Dolanaar to complete the quest.