Crown of the Triumvirate 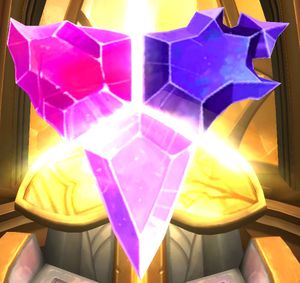 The completed Crown of the Triumvirate.

The Crown of the Triumvirate is an ancient relic of the eredar people of Argus. It was crafted thousands of years ago by the Triumvirate consisting of Velen, Kil'jaeden, and Archimonde, to bring prosperity to all.[1] The Crown is composed of three gems - Kil'jaeden's Crest of Knowledge (fuchsia), Archimonde's Sigil of Awakening (purple), and Velen's Eye of Prophecy (light pink).

The Crown was unmade long ago, and on their own the individual pieces provide little power.[2] Archimonde kept his Sigil of Awakening at the Conservatory of the Arcane, caring little for the power it provided on its own and using it as a reward for several trials he developed.[3] After Archimonde and Kil'jaeden joined Sargeras in his Burning Crusade and Velen fled Argus with the exiles, Kil'jaeden had the Crest of Knowledge locked away in the Seat of the Triumvirate as it was powerless alone.[4] Velen kept the Eye of Prophecy with him for millennia, keeping it close as part of his staff.[5]

The Army of the Light sought to reform the Crown of the Triumvirate in order to penetrate the fortified walls of Antorus, the Burning Throne. The Sigil of Awakening was obtained by completing the ancient trials of the Augari. After retrieving the Crest of Knowledge from L'ura in Mac'Aree, Velen removed the Eye of Prophecy from his staff and rejoined it with the others, and the Vindicaar changed from purple to holy gold. The Crown reformed, it granted Light's Judgment the power to blast a way into Antorus, allowing the Army of the Light to begin its assault.[6]