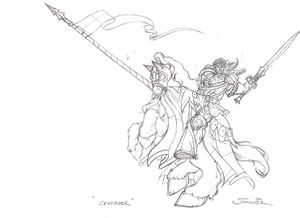 Crusader concept art, which was reused for the Knight.

The Crusader was a cancelled hero unit of the human Alliance.

Their model was later recycled as the Knight. In the Warcraft III alpha, the Knight had a different model that wielded a ball and chain, more closely resembling the Knights of Warcraft I. The Crusader's sword also had a glowing effect that was not given to the Knight.[1]

The Crusader was to have several Seal abilities.

Crusaders made a cameo in The Frozen Throne as an elite version of the knight in the Theramore Isle map of the Old Hatreds chapter of The Founding of Durotar, fighting for Kul Tiras.[2]

Gives target unit full upgrades, including unknown spells, for a limited time period. Can be upgraded to Seal of Lords, and then to Seal of Kings. Each upgrade provides a longer time period for his improved abilities.

Gives target unit a large defense bonus. Can be upgraded to Seal of Valor, and then to Seal of Fortitude.