Crusader Bridenbrad is a courageous, heroic, and humble paladin of the Argent Crusade, now infected by the Plague of Undeath. Tirion Fordring sends players on a rather elaborate mission to save him, which includes visiting several NPCs outside the zone. Bridenbrad's quest chain is cited by many players as one of the most moving stories in the game.[1][2][3][4][5][6][7]

After a player completes

[80] The Boon of A'dal, Crusader Bridenbrad will phase out of existence for that player and will no longer be available. 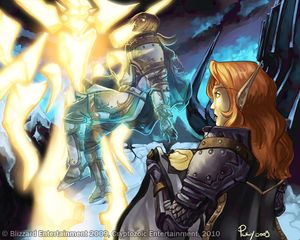 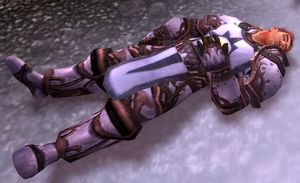 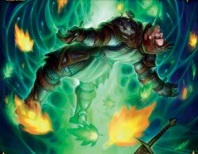 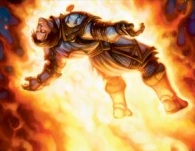 The Boon of Alexstrasza. 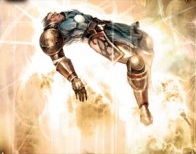 The Boon of A'dal.

The quests offered concerning Crusader Bridenbrad do not reveal anything of his history before Icecrown, though all who know of him agree he was a great and brave champion of the Light. He was honored to serve alongside Tirion Fordring. He fought with the Crusade at the Broken Front when it was attacked by the Scourge, and was commended by Fordring for singlehandedly saving more than a dozen men from the carnage. Though Fordring wished to honor him for his valor, Bridenbrad chose to disappear into the mountains when he discovered he'd been infected with the Plague of Undeath, to avoid spreading it further. He does not fear death, but loathes the thought of becoming part of the Scourge.

The heroes sent by Fordring try and find a means to save Bridenbrad, resorting to asking for the help of Keeper Remulos, Alexstrasza, and finally A'dal. A humble man, Bridenbrad is flattered by intervention from beings of such importance, though perhaps mildly perturbed to have so much attention and persistence applied for his benefit. His first thought upon meeting the heroes is to avoid infecting them or others with the plague, but he grows more comfortable with them and is eventually inspired by their actions of the "great good left within this world", easing his fears that "darkness will prevail in his absence". He is glad to have them by his side in his final moments, when he ultimately cannot be saved. Upon his passing, A'dal and his Naaru take Bridenbrad's soul into the Light, ensuring his rescue from undeath and promising him "paradise eternal".

After the player tries to save him for a second time:

"Thank you for everything that you have done. Your selfless actions have renewed my hope that there is yet great good left within this world - I can depart without fear that darkness will prevail in my absence.
Go now, go with no regrets."