Cry of the Warsong (WC3 Orc)

From Wowpedia
(Redirected from Cry of the Warsong)
Jump to: navigation, search

Cry of the Warsong is chapter 3 of the orc campaign, The Invasion of Kalimdor.

Five days later, near the foothills of the Stonetalon Mountains...

Establish a Base over the remains of the Human settlement by building a Great Hall.

In order to safely reach the pass that leads to the north, you must purchase two Goblin Zeppelins and return them to your main base.

Hellscream has attacked the humans against your direct orders. Now the humans are attacking your base in retaliation, leaving no choice but to fight your bitter enemies once more. Destroy the human settlements to halt their attacks against your forces.

Thrall and his forces are seen running through the desert.

Grunt: Warchief, we've been trudging through this wasteland for a week with nothing to fight but centaurs and pig-men! We need real enemies to test our mettle!

Thrall: Yes, boredom and the beating sun have put us all on edge. But we must push on! All will be made clear once we meet the Oracle.

Grunt: As you say, Warchief.
Bells ring from the distance. Thrall's forces arrive at a scene of Grom Hellscream and the Warsong clan assaulting a small human base.

Grunt: Look! It's the Warsong clan! And they're battling humans!

Archmage: Wretched orcs! How dare you follow us to this land!

Grom Hellscream: Save your breath, human! You'll need it to scream when I start tearing off your limbs!

Thrall: Grom, what was this about? And how the hell did these humans get here, anyway?

Grom Hellscream: Same way we did, little brother. Apparently, a frail girl named Proudmoore leads them. Her forces have cordoned off the pass that leads to the north.

Thrall: Well, we must make it through the pass despite her. I'll send our hunters to scout the area while we establish a base. Until then, the humans are not to be touched!

Grom Hellscream: Whatever you say, Warchief.

Headhunter: Hey, boss-man, we spotted multiple human encampments nearby. There also be a goblin laboratory protected by a base to the north.

Thrall: Interesting. If we can reach the goblins without incident, we can hire their zeppelins to fly us above the pass.

Grom Hellscream: I can wait no longer. The humans must be slaughtered!

Grunt: Warchief, the Warsong clan is attacking the humans, despite your orders!

Thrall: Damn it! There's nothing to do now but fight! Tighten our defenses! I'll deal with Hellscream later.

Grunt: Warchief, the Warsong Clan is attacking another human encampment!

Thrall: Perhaps this is our destiny, to go on fighting the humans forever...

Thrall's forces board the Zeppelins.

Thrall: With these, we can reach Stonetalon Peak by morning.
Grom and a few Warsong orcs arrive.

Grom Hellscream: A true warrior would simply take the pass from the humans.

Thrall: Have you lost what's left of your mind, Grom? I gave you a direct order to leave the humans alone! What the hell is wrong with you?
Grom runs up to Thrall.

Grom Hellscream: Don't lecture me, pup! The wretches deserved death! Don't you feel it, Thrall? It's like the old days... like the demons are near.

Thrall: I don't know what's come over you and your men, but this bloodlust is a liability that I can't afford.

Grom Hellscream: I'm sorry, Thrall. You're right. I... I can handle it.

Thrall: I can't take that chance, Grom. Take your clan into the northern forest and build us a settlement. I'll come and find you after we've reached the Oracle.
Thrall and Grom part ways, with the warchief boarding one of the Zeppelins as they take off while Grom runs off in the other direction.

After days of marching across the barrens, Thrall's troops are growing restless. Thrall, however, assures them that all will be well when they reach the Oracle.

Suddenly, they stumble upon Grom Hellscream and his Warsong Clan battling a group of humans. Thrall and his warriors rush to Hellscream's aid and the orcs defeat the humans. After the battle, Grom tells Thrall that the humans, led by a "frail girl", have blockaded the passage to Stonetalon Peak. Thrall decides that they should look for a means to bypass the humans. He orders Grom to leave the humans alone for the time being.

Grom returns to his camp while Thrall constructs his own base. A short time later, a troll scout reports that there is a nearby Goblin Laboratory selling Zeppelins. If they can acquire the Zeppelins, the orcs will be able to fly past the human forces. However, as Thrall makes preparations to secure the Zeppelins, Grom gives into his bloodlust and starts attacking the humans. The humans launch a counterattack against the orcs forcing Thrall to fight back.

After fending off repeated human attacks, Thrall leads his forces toward the Goblin Laboratory. They are forced to destroy at least one human base blocking the way. The Goblin Laboratory itself is surrounded by hostile Centaurs and Harpies. Thrall defeats these creatures and hires the Zeppelins he needs. He then flies them back to his base.

Despite having achieved his goal, Thrall is greatly upset. Many lives have been lost in a battle that could have been avoided. Thrall confronts Grom and angrily rebukes him for disobeying orders. Grom is defiant at first, but then backs down and apologizes for his disobedience. Thrall, however, is not convinced that Grom can control his bloodlust. He orders Grom to take his clan to the northern forests and construct a settlement while the rest of the Horde seeks out the Oracle. 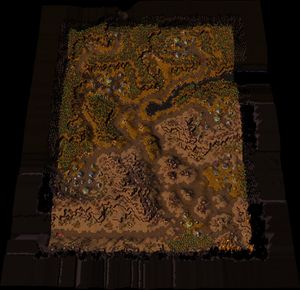