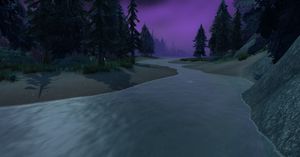 The Crystalbrook River[1] is a small stream dividing Ammen Vale from the rest of the Azuremyst Isle. It can be considered to be part of the Veiled Sea, as it is connected to that sea at both its north and south ends. The river is teeming with schools of red snapper, making it a beloved fishing place of the draenei. The fishing trainer Diktynna has set up shop at the Ammen Ford, a shallow crossing through the Crystalbrook River. Although not seen in game, murloc attacks have been reported at this location.[2] The river also has a large number of crabs.

The ruins of a small elvish tower is seen at the river's southern mouth. Additionally, a part of the Exodar's wreckage can be seen on the eastern shore just north of Ammen Ford.