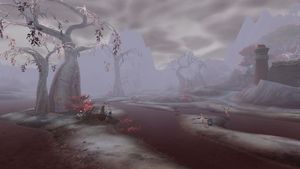 Sethekk Hollow, the source of the affliction.

"My blood shall blacken the sea until it runs thick as tar! My flesh shall fester and spoil until the very sky rots with it!"[1]
— Sethe

The Curse of Sethe is an ancient curse that causes arakkoa to become wretched and flightless and which cuts them off from the light of their sun goddess, Rukhmar. It was created by the wind serpent god Sethe during his final moments after the great battle between him, Rukhmar and the raven god Anzu, who then became the first to contract the curse after devouring Sethe. To this day, the pools of Sethekk Hollow are still contaminated with Sethe's blood and curse, and any arakkoa who comes in contact with its water becomes afflicted. The Adherents of Rukhmar throw heretics and criminals into the fetid pools as a punishment, and over time these cursed outcasts have formed a society of their own. 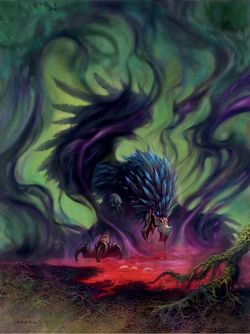 Anzu contains the affliction by taking it upon himself.

The curse cripples arakkoa with visions of darkness and intense pain,[2] searing the flesh and tearing at the mind.[3] The mind reels, the body writhes, and the wings wither. Most arakkoa die or go insane. Only the strongest can resist.[2] Any arakkoa afflicted by the curse permanently lose their ability to fly and become forever cut off from Rukhmar's light.[4]

The affliction is hereditary and affects the entire lineage, meaning that the offspring of a cursed arakkoa will also be cursed. At the time of the war against the Iron Horde, many arakkoa had been born with it.[5]

The Curse of Sethe has been shown to be reversible by the power of fel. Shadow-Sage Iskar regained his wings upon drinking demon blood.

The Curse of Sethe is older than the arakkoa race itself. It was created by the wind serpent god Sethe during his final moments after the great battle between him and Rukhmar, just before he was devoured by Anzu. Only a small trickle of Sethe's blood managed to escape the Broken Spire where he fell, trickling down to blight the valley below, which would become known as the Sethekk Hollow. Soon, however, Anzu felt Sethe's hatred coursing through him. His back twisted, his wings became weak and his mind was wracked with painful visions. The raven god had contained Sethe's curse by taking it upon himself. Anzu would grapple with the curse for some time before retreating to the shadows. Rukhmar, terrified of the curse, would never land in Arak again, and thus created the arakkoa in hopes that they would one day bask in the wind and sun as she had.[1] 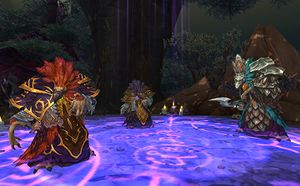 A group of Outcasts.

At an unknown point in time, the Adherents of Rukhmar, the ruling sect of the arakkoan capital Skyreach, began the practice of using the curse as a punishment. Those found guilty of breaking the law, dabbling in shadow magic, or worshipping gods other than Rukhmar are hurled from the spires and into the cursed pools of Sethekk Hollow, where their wings shrivel and their bodies contort.[4] This practice has existed for generations.[2]

When Terokk, a beloved king who was betrayed and cast into the pools by the Adherents, returned from exile he was broken and flightless. Rumors of his cursed state swept like wildfire through the arakkoa, giving rise to superstitious charms and cures. Dreamcatchers endure as one of the most clung-to icons of safety, for the arakkoa believe the curse will entangle itself in the dreamcatcher and fade in the morning sunlight.[6][7] It was also held that holding a dreamcatcher in front of oneself would make it act as a net to capture the curse.[6]

The Adherents claimed not that the waters of Sethekk Hollow was the source of the affliction, but that the curse was the result of falling from Rukhmar's grace — the result of disobedience, among other things, and that it was something brought about by one's own weakness, not by an outside force. The Adherents believed that even being in the presence of the Outcasts could expose one to the curse, and that it could have lingering effects on the mind of an arakkoa even after a sun-priest had performed purification rites on them. It was believed that lethargy, tardiness and questioning the orders of elders were the first warning signs that the affliction was present.[6] Adventurers can also uncover writings, which, among other things, includes reminders to be vigilant for signs of the curse amongst neighbors and friends.[8]

The Outcast Kazu has experimented in weaponizing the affliction against the Adherents, as there is nothing that they fear more than the power of the curse. His previous attempts to bottle the pooled blood have failed. It breaks down and dissipates when it is taken away from Sethe's bones, but he has high hopes for the congealed form of Sethe's blood.[9]

Due to the similarities between the two, the "sun sickness" described in the Unmarked Journal may be connected to the Curse of Sethe.