From Wowpedia
(Redirected from Curse of the Worgen)
Jump to: navigation, search

For the comic book mini-series, see Curse of the Worgen (comic). 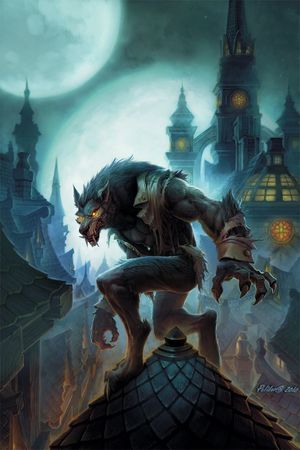 The worgen curse, also known as the curse of the worgen[1] or simply the Curse,[2][3][4] is a curse that transforms people into the ferocious beasts known as worgen. The curse can be passed to humans and night elves. Those bitten by these unruly beasts contract the virulent curse and will turn into worgen.[5][6] Drinking the blood of a worgen will also turn the drinker into one.[7] Humans and night elves are so far the only known sentient beings able to contract the curse. Children of those corrupted with the curse are not born with the curse and have to be infected by being bitten or drinking worgen blood in order to attain a Worgen form.[8]

The worgen curse reached pandemic levels when it spread into the secluded human kingdom of Gilneas, transforming almost all of its inhabitants into worgen. These particular worgen are known as the Greymane worgen. After the curse rippled through Gilneas, Krennan Aranas managed to concoct a partial cure for it. Upon experimenting it on captured Gilnean feral worgen, it allowed them to regain their sanity (giving them control of their minds), thus allowing them to retain the semblance of their past human selves. The night elves later offered a more effective cure: Drinking from the wells of Tal'doren would allow them to transform back into their humans selves at will.

In worgen form, they are faster and stronger; with better eyesight and an animal instinct inside them that courses through their veins.[9] Due to their ties with the wilds, worgen are able to call upon their bestial fervor to travel great distances. With the aid of all four limbs, a worgen can sprint at speeds rivaling the swiftest horses, nightsabers, and mechanostriders. With the curse comes also a resistance to other curses and diseases[10] and thus immune to the depravity of the Forsaken.[7] The worgen curse also makes raising them into undeath far more difficult than it is for normal humans. The worgen curse has roots in both the Emerald Dream (through the wolf Ancient, Goldrinn) and the holy power of the goddess Elune. In addition, those worgen who imbibe the waters of Tal'doren — through the ritual they undergo to maintain balance between the worgen curse and their humanity—have a further resistance to the corruption of undeath.[11] Realizing that the Forsaken will never stop hunting them until they become servants to the undead whether in life or death, the Hillsbrad Refugee decided to take the offer of blood by Darius Crowley. Thus they became worgen, to have the power to have their vengeance, and also so that the val'kyr would not be able to raise them as Forsaken after their death.[7]

The Wolf Cult had been secretly afflicting Gilneans with the worgen curse; bolstering the worgen population and using their numbers to build a feral worgen army that would be used to launch an attack on Gilneas City. The devastating attack had weakened the nation's defenses and paved the way for the Forsaken invasion.

In a small cabin in Silverpine Forest's southeast, lives Halmish, an old man who states the forest is cursed. Not because of the plague or the undead, but by a curse that changes men into beasts.[12][13] At night, when the moon rises above the treetops and bathes the world in pale light, terrible howls erupt from Shadowfang Keep and Pyrewood Village — as if the men and women within had transformed into wolves. Probably the curse old Halmish mentioned.[14]

A Dalaran wizard named Alphus Wordwill is researching on what he calls the "Worgen Curse".[13] Only one place in all of Lordaeron bears traces of this strange curse: the fortress of Shadowfang and the nearby Pyrewood Village. Alphus believes this curse is somehow tied to the moon. When the full moon rises, those afflicted by this curse undergo a transformation, turning into strange, man-wolf hybrid creatures. This transformation is mental as well as physical; the worgen, like Alphus calls them, desire to hunt, slay and eat. No matter their dispositions as humans during the day, at night under the full moon these individuals are bloodthirsty monsters. He believes that a possible cure might solve the problem instead of just simply eliminating them. He hopes that the cure, instead of preventing their transformation, would preserve the afflicted individual's mindset after it. Such an effect would allow good-hearted worgen to take on fearsome physical abilities and use these against the Forsaken, the Scourge and other evil powers. Given proper funding and support, he believes he can create such a cure.[14]

Alphus managed to get his funding and begun working on a cure for the Worgen Curse. He needed heroes to protect him and his servants as they moved through the forest gathering reagents and conducting tests. Later he sent these heroes to sneak into Pyrewood and drop the cure into the water supply, then they sneaked out and observed the changes over several days. This activity undoubtedly angered Shadowfang Keep's mysterious overseers. In addition to staying alive through all of this, Alphus sent the heroes to slay Shadowfang's evil lords to permanently stamp out the curse's evil.[15]