Cyanigosa is a powerful blue dragon located in the Violet Hold. She has been sent there by Malygos as the supreme commander of the invading forces to release the prisoners and enter Dalaran itself. She is the final boss encountered in this instance. 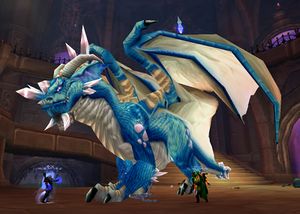 Cyanigosa in World of Warcraft.

Malygos chose Cyanigosa to execute his machinations because of her unquestionable loyalty. She did not flinch when her master withdrew into madness; she did not falter when he commandeered Azeroth's ley lines; and she will not fail to eradicate all who defy him.

Fairly easy tank and spank. Tank should aggro her and tank her facing away from the group to get away from the breath. Periodically she does Uncontrollable energy, which can be dispelled. Also she will randomly summon everyone to the middle and throw them back. The teleport is an aggro wipe. Character Pets do not get their aggro wiped, however, so make sure the main tank taunts Cyanigosa right after the teleportation.

The subject of this section was removed from World of Warcraft in patch 3.3.0.

Cyanigosa in her elf form.

Spawn
A valiant defense, but this city must be razed. I will fulfill Malygos's wishes myself!

Aggro
We finish this now, champions of Kirin Tor! (In audio, she says "the Kirin Tor!", but in-game text omits 'the'.)

Disruption
Am I interrupting?

Death
Perhaps... we have... underestimated... you.

Cyanigosa appears as one of the bosses that can be encountered in the Dalaran Heist single-player experience in the Rise of Shadows expansion for Hearthstone.