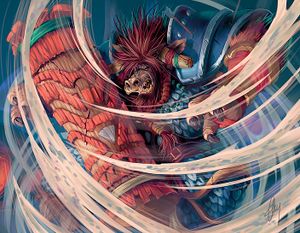 Cyclone is a Balance and Restoration druid honor talent, available at rank 6 for Restoration and rank 10 for Balance. It is very similar in mechanics to

[Banish]: targets affected by Cyclone cannot move or perform any actions, are immune to receiving heals or buffs, and also completely immune to all incoming damage and unable to be debuffed. Cyclone is affected by diminishing returns, both in PvE and in PvP. Certain versions of this spell cast by monsters CAN be dispelled by

[Mass Dispel]. Cyclone has no cooldown.