For the character from an alternate universe, see Cyrukh. 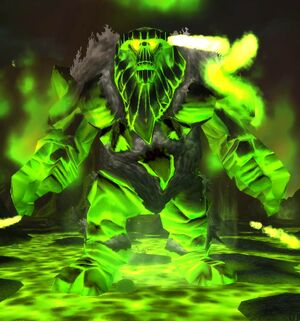 Cyrukh the Firelord is the final boss you fight in

[70G5] The Cipher of Damnation. He is referred to as an elemental lord, which could make him near Ragnaros in power, as well as sharing a title ("Firelord") with him. He is also called "The Dirge of Karabor".

Cyrukh was brought into being four years before the opening of the Dark Portal. For years, the fel energies used by the Horde had dampened the power of Draenor's elementals and thrown them into turmoil. Yet as the magic of the orcish warlocks began killing Draenor, the elementals rallied together, vowing to destroy the orcs and stop their desecration of the land. They pooled their dwindling strength and fused into a single mighty being: Cyrukh.

The orcs were gathering near a volcano outside Karabor in Shadowmoon Valley when, without warning, the mountain erupted into fire. Cyrukh took form in the heart of the volcano and unleashed his elemental wrath on the orcs. A roaring firestorm swept down the mountain and tore through the Horde's ranks. Cyrukh's appearance stunned and terrified the orcs, especially former shaman who saw his attack as a sign that they had angered the elements by embracing fel magic.

Gul'dan scrambled to forestall catastrophe, for if the warlocks abandoned the Horde then they would never stand a chance against the draenei. In Cyrukh, Gul'dan saw an opportunity: the elements gathering themselves all in one place had made them vulnerable. Gul'dan planned to steal Cyrukh's power for himself and for the rest of the Horde, and destroy the connection between orcs and elementals once and for all. Gul'dan and the Shadow Council gathered on the slopes of the volcano and channeled a powerful spell:

[The Cipher of Damnation].[1] None of them, not even those who had once been shaman, hesitated to perform the task. Together, they flooded Cyrukh with fel power and shattered his physical form. The mountain roared in protest, chasms tore through the earth and spewed forth rivers of fel and elemental energies. Gul'dan and his warlocks used those energies to infuse the other orcs with strength.

The Horde was now more powerful than ever before, and the last connection between the orcs and the elemental spirits had been severed. The fel volcano would come to be known as the Hand of Gul'dan.[2]

Objective: Kill Cyrukh to appease the elemental spirits and prevent him from from being able to sunder the land again.

His model is a recolored molten giant one called a "fel giant".