Sir Cyrus Crestfall[1] is a human located at Tradewinds Market in Boralus. He is the Harbormaster of Boralus, but used to be one of Daelin Proudmoore's most trusted knights. He is also the guardian of House Proudmoore's ward, Taelia, a job given to him by Daelin himself.

During a battle in the Second War an orcish juggernaught struck the transport ship that Cyrus and a friend of his were on, wounding his friend from splinters flying across the deck. It was serious enough that he could have been sent home, but not wishing to leave the war before it was over, Cyrus's friend patched himself up and told the healers he was fine. Days later he died painfully in his bunk from infection; only then did he ask for help, but he was far too gone for any healer to save him.[1]

During the Third War, a young girl named Taelia was sent to Kul Tiras by her father, Bolvar Fordragon. Cyrus was hand-picked by Daelin to raise her and forced him to take a desk job. It was the only reason he wasn't at Theramore with Daelin during the Invasion of Durotar.[1] Though he did as ordered, at the time Cyrus was hurt by this, believing that Daelin didn't have faith in him to have him as part of the guard. Over the years, however, he came to realize it was exactly the opposite - Daelin wanted Taelia to grow up strong of arm and noble of heart - and had faith that Sir Crestfall could make that happen.[2] 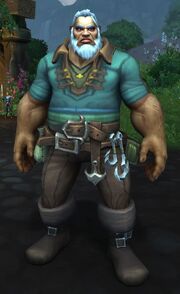 Years later, after Daelin's death at Theramore and after Kul Tiras left the Alliance, an Alliance emissary was arrested when they arrived in Kul Tiras with Jaina Proudmoore. Cyrus hired Flynn Fairwind to intentionally get arrested so he could break the emissary out of Tol Dagor.[3] When Genn Greymane and the 7th Legion arrived in Boralus shortly after, they were confronted by the harbor guards on the order of Priscilla Ashvane. However Cyrus reminded the guards that they served Kul Tiras and the Proudmoores, not House Ashvane, and that they answered to him. He gave Greymane his office to use as a war room, fearing that, like his friend in the Second War, Katherine Proudmoore's advisers have kept her blind to the infections that have spread through the kingdom that he loves.[1]

With Cyrus' support, the Alliance brought Kul Tiras back into the fold and together they fended off their common enemies during the Fourth War. The Alliance eventually joined forces with Varok Saurfang's Horde rebels and they marched together to face Sylvanas Windrunner and her loyalists outside the Gates of Orgrimmar. To prevent any further bloodshed, Saurfang challenged Sylvanas to a Mak'gora. Saurfang died in the duel but tricked Sylvanas into revealing her despicable character, which swayed a majority of her followers to abandon her, thus ending the Fourth War. When Cyrus heard the news of Saurfang's death, he revealed to the Alliance emissary that he once almost died fighting against Saurfang during the Second War and the orc killed many of his soldiers. Cyrus planned to get revenge on Saurfang even in his old age, but he begrudgingly respected Saurfang for the good he did in life and thinks he may have atoned for his transgressions in his own way.

Why thrust this burden on me? Why deny me the honor of fighting by his side? I thought maybe I had done something to lose his faith.
Over the years, I have come to realize that the opposite was true. He wanted Taelia to grow up strong of arm and noble of heart - and had faith that I could make that happen.

I once fought against Saurfang. In the Second War. He killed a lot of good soldiers. Nearly killed me.

I've hated him for years. Always dreamt of giving him some payback, even in my old age.

But... he had done his share of good since then. And he saved many Alliance lives in the end.

I never did give him that payback. But maybe he repaid that debt on his own.