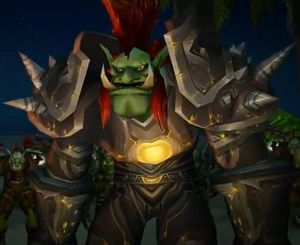 Daakara in the Rise of the Zandalari trailer.

Daakara is the sixth and final boss of the Zul'Aman instance.

Daakara is the Warlord of the Amani tribe, successor to Zul'jin and the final boss of the Zul'Aman instance. With the aid of the Zandalari, the remaining Amani have reassembled under new, sturdy leadership in Daakara, seeking to avenge Zul'jin's death and realize his dreams of rebuilding the troll empire.[1]

To fill the power vacuum left from the death of their warlord, Zul'jin, the remaining trolls of the Amani tribe chose their favored champion, Daakara the Invincible, to reclaim their lost glory.

Stage One: No One Pushes Us Around!

Daakara begins the encounter in troll form. He performs Grievous Throw at random players and uses Whirlwind against nearby enemies.

Stage Two: Got Me Some New Tricks!

Daakara absorbs the essence of either the bear or lynx.

Essence of the Bear

Essence of the Lynx

Daakara absorbs the essence of either the eagle or dragonhawk.

Essence of the Eagle

Essence of the Dragonhawk

Daakara shifts to one of two possible pairs of animal forms (bear/eagle or lynx/dragonhawk) during the fight, when his health drops down to 80% (bear or lynx) and 40% (eagle or dragonhawk). Transforming wipes his threat (and he is immune to taunts), but debuffs and DoTs remain on him.

As a bear, Daakara retains Nalorakk's Surge mechanics; three players will need to alternate being the furthest away from the group.

As a lynx, Daakara will randomly target a person and pound them with a stun, and each attack adds a stacking bleed. It is important that the tank taunts him immediately upon losing aggro, reducing the damage suffered by random party members. There is a secondary AoE attack that deals light damage to every party member.

As an eagle, Daakara summons a number of whirlwinds that periodically pursue players, and deal damage every time a player casts a spell. The whirlwinds follow a relatively predictable pattern: after waiting a few seconds, they move in a straight line to the location of a random player. Merely moving away from where you were standing when the whirlwinds begin moving will allow you to avoid them.

Dakkara also has a hard enrage at about 11 minutes which increases attack speed by 150% and damage by 500%, although groups are unlikely to see this happen unless overall dps is mediocre or dps dies early in the encounter. However, it is still possible to succeed in spite of the enrage if the group is lucky enough to get Daakara transformed into Eagle during the last phase since the Berserk does not affect the damage of his attacks in Eagle form.

Daakara uses the same quotes as Zul'jin, with some minor exceptions.

Enter
Everybody try to keep de Amani Empire down. Now we got friends. We wit de Zandalari now. We part of something bigger. You can't stop us all. De whole world gonna drown in blood!!

Aggro
De Zandalari give us strength. Nobody push around de Amani no more!

Transforms into Bear
Got me some new tricks...like me bruddah bear!

Transforms into Lynx
Let me introduce to you my new bruddahs: fang and claw!

Transforms into Eagle
Dere be no hidin' from da eagle!

Transforms into Dragonhawk
Ya don' have to look to da sky to see da dragonhawk!

Unused quotes
This is why they call me... invincible!