For other uses, see Dabyrie (disambiguation).

Dabyrie's Farmstead is a farm located in the northern reaches of the Arathi Highlands. It is the home of the Dabyrie family—Kenata Dabyrie and her children Fardel and Marcel—citizens of the kingdom of Stromgarde and members of the Alliance. The farmstead is protected by the Dabyrie Militia.

The rare wasp Boros is found in the hills directly northwest of the farm. 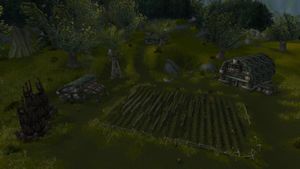 Dabyrie's Farmstead before Battle for Azeroth.

The Forsaken Genavie Callow had a grudge against the Dabyries because they managed to survive and prosper after Third War, while Genavie lost her family to the plague, and her estate was looted and burned. In addition, the Dabyries stole the only precious belongings she had left after being raised to undeath. She wanted them dead and so she sent, twice, Horde adventurers to kill them.[2] They didn't succeed, though.

During the time of the Battle for Stromgarde, when the Horde controlled Ar'gorok, the Dabyries had control over the farm, and it was also reinforced with soldiers from the League of Arathor. If the Alliance controlled Stromgarde Keep, Dabyrie's Farmstead was taken over by the Syndicate. In the end though, the Alliance managed to drove the Syndicate back to Alterac,[1] returning the farm to the Dabyries.