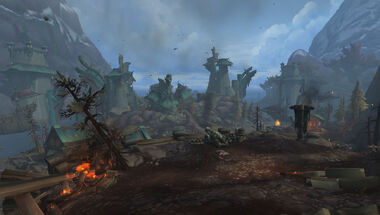 Daelin's Gate is a large defensive seagate that has historically protected the southern channel into Tiragarde Sound. As one of only three entrances into Kul Tiras's inner bay, the fortress is of great strategic importance to the Admiralty of Kul Tiras. The settlement of Vigil Hill can be found beside the gate, with both locations garrisoned by the Proudmoore Guard.

Built with the finest steel from the Waycrest mines,[1] Daelin's Gate stood guard over the southern passageway into Tiragarde Sound.[2] At the time of the Kul Tiran civil war, it would become a target of the Irontide Raiders and their fleet; armed with Azerite weaponry provided by the Ashvane Company, the pirates were able to easily reduce the main gate to ruins. In doing so, they breached the inner section of Tiragarde Sound, beginning to plunder and ransack the surrounding area near Vigil Hill. Only the intervention of Proudmoore forces would turn the invaders back,[3] however renewed attacks continued for some time.[4] The destruction of the gate, orchestrated by Lady Priscilla Ashvane, was hoped to undermine the authority of Lord Admiral Katherine Proudmoore. Though successful in this, Ashvane's treachery would soon after be revealed, and the coup crushed.[5]

As part of the ongoing Fourth War, agents of the Horde would also become active in and around Daelin's Gate.[6] These infiltrators would harass the troops guarding the area, while also acquiring information on shipping through the channel.