Not to be confused with Dagg (child). 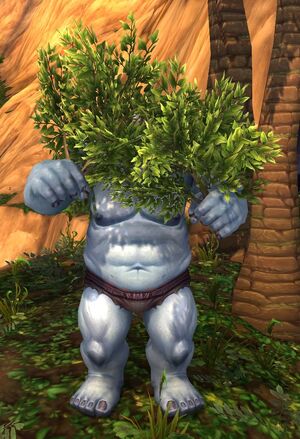 Dagg is a great ogre thief and a master of subterfuge and disguises.[2]

He is found in a Thunderlord Cage at two locations in Frostfire Ridge:

Once freed, he yells out to the ones who "captured" him, to catch their attention, and runs off as a distraction for the Commander.

Freeing Dagg both times will unlock him as a follower for both the Alliance and Horde. He will appear just outside the garrison's main entrance and offer the quest

[92] Services of Dagg to gain his services.

He can also be seen in the Stonemaul Arena in Gorgrond posing as a tree.

Disguising himself as Dagg'um Ty'gor, a two-headed ogre mage, he can be found in Mar'gok's Overwatch.

Though his disguises in Gorgrond and Nagrand are very simplistic, even compared to his cages in Frostfire, they seem to be more than enough to fool the other ogres.

Given his use of disguises, diversions, his penchant for the word unanimous, and his nature as a subtlety rogue, he appears to be very intelligent for a one headed ogre.

Dagg can be found hiding in Uncrowned Vault, with a nice disguise comprised of a top hat, glasses, fake mustache and a leaf.

At Deliverance Point on the Broken Shore he is submerged in the pool of water under a dragon turtle shell.

As a garrison follower

[Sap], which counters Deadly Minions. Despite being in Frostfire Ridge in areas frequented by Horde players while questing, he can in fact be recruited by both Factions.

In 'cage'
Shhh! Don't let dem see us talkin' or you blow my cover!

Dagg is unanimous in dis.

Given the fact he is a subtlety rogue, his future self may be Dagg'um Ty'gor. If so, he would have been magically given an extra head by Gul'dan in the prime timeline. Its also possible Dagg is fused with Ty'gor later also through the Altar of Storms, given the amount of independence the two have.

Supporting a connection between the two, Dagg is seen using the name Dagg'um Ty'gor while using a fake prop head in Nagrand as part of his two headed ogre disguise. Another direct connection is made between the theme of hiding behind trees and the fact that the description of Dagg'um Ty'gor in World of Warcraft Miniatures Game said that he was sure that nobody can see him behind trees.

His repeated use of the phrase "Dagg is unanimous in dis" may be a subtle nod to this, as usually two-headed ogre's heads think in unison, and are unanimous on all things. Ironically, the quote from the TCG implies that his heads are in fact Not in unison.