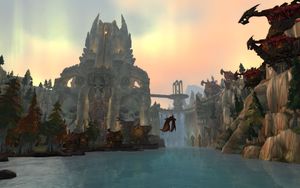 Daggercap Bay, with Utgarde Keep in the background.

Daggercap Bay is located in central Howling Fjord bordered clockwise by Valgarde, Wyrmskull Village, Utgarde Keep, the Falls of Ymiron, Nifflevar and Ghostblade Post. The only known inhabitants in the bay are the residents of Valgarde and the vrykul of the nearby settlements. However, the water is far too cold to support most forms of aquatic life.[citation needed]

Valgarde is on the western shore and the harpooning Nifflevar is on the cliffs on the eastern side. The bay is fed by Lake Cauldros via the Falls of Ymiron, and upon that lake rests Utgarde Keep.

Daggercap Bay dominates the southern end of the Howling Fjord, which is all rock. It is by far the finest — and largest — bay in all Northrend, and it has high, sharp rock walls on either side and enough space for only one large ship to pass through. It widens out quickly, however, into a roughly circular bay with calm waters and a rocky northern beach. You can land almost anywhere along the Shiverwind Coast, if you are an expert sailor in a small boat, but for larger vessels and less experienced crew the only real option is Daggercap. This natural harbor provides an ideal launching point for expeditions throughout the continent.[1]