"Now prepare to meet your doom at the hands of Ragnaros' most powerful servant."

Emperor Dagran Thaurissan was the Emperor of the Dark Iron clan, along with his wife, Moira Thaurissan, the estranged daughter of King Magni Bronzebeard. He is notorious for pledging the Dark Iron clan in service to the elemental lord Ragnaros, who his ancestor, Sorcerer-Thane Thaurissan, successfully summoned to the mortal plane. His allegiance to the Firelord led to his eventual downfall when he was killed by forces of the Alliance sent by Magni.[2]

He was succeeded by Moira, who rules until their son, Dagran Thaurissan II, is of age to take over the leadership of not only the Dark Irons, but of Ironforge itself.[3]

Emperor Dagran Thaurissan, a direct descendant of Sorcerer-Thane Thaurissan and Modgud, ruled the Dark Iron clan with a combination of charisma, sorcery and iron will. The Emperor ruled his people not from the city founded by (and named for) his ancestor, but rather from the depths of Blackrock Mountain near the entrance to Ragnaros's domain, the Molten Core. The Emperor's Dark Irons swarmed the depths of Blackrock Mountain, and have also been seen in the Searing Gorge to the north and the Burning Steppes to the south. Even as the leader of his clan, he was, like all Dark Iron dwarves, a servant of Ragnaros.[4] However, while Thaurissan delighted in the power that Ragnaros had bestowed upon him he bristled at his servitude to the Firelord. When Ragnaros ordered Thaurissan to prepare the Dark Irons for a new war, the emperor was overjoyed. He had long dreamed of conquering the other dwarf clans, not only to rule over them but also to wield their combined power to break free of the Firelord's control.[5]

The Emperor kidnapped King Magni Bronzebeard's daughter, Princess Moira Bronzebeard, intending to use her as a hostage of last resort once war began. He believed that Magni would never consider assaulting Blackrock Mountain if it meant putting Moira in harm's way. Thaurissan found himself falling in love with Moira; she had a sharp wit and strong will, and was not intimidated in the slightest by her predicament. The two dwarves began to speak at length about their hopes for the future, and Thaurissan confided in Moira that he wanted to free his people from enslavement and was willing to do anything to achieve that.[5] Moira, too, soon fell in love with him because he treated her with the respect due her position, and even kindness and affection. She became pregnant with his child, who is half Bronzebeard dwarf and half Dark Iron dwarf, and the heir to both thrones of Shadowforge and Ironforge.

[Ironfoe], but not by legitimate means. The hammer's hereditary owner, Reginald Windsor was captured and imprisoned by the Dark Irons, his weapon claimed by Dagran.

He also sent his emissaries and agents to the gnomish capital of Gnomeregan, apparently in an effort to back the self-proclaimed ruler of Gnomeregan, Sicco Thermaplugg.[6]

King Magni Bronzebeard sent a team to kill Emperor Thaurissan, and retrieve the previously thought to be ensorcelled Moira back to Ironforge. Yet Moira refused to come home and announced that she was pregnant, and that the death of her husband has left a terrible, fiery rage within her heart.[7]

Emperor Dagran Thaurissan rules alongside Princess Moira of the rival Bronzebeard clan. Debate rages over whether the emperor ensorcelled his bride or she willingly joined him. Whatever the truth, Thaurissan's continued presence bodes ill for the future of his clan. So long as he lives, the Dark Irons will remain pawns of Ragnaros, and a dire threat to kingdoms throughout Azeroth.

Emperor Dagran Thaurissan is the final boss of the Blackrock Depths. During the battle his is assisted by either Moira Thaurissan or High Priestess of Thaurissan. 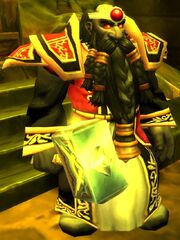 Prior to the Cataclysm all of the mobs in the seat of the room were aggroed with the Emperor. At low levels it was recommend that you cleared the room before engaging the boss, though high levels could easily take care of them.

Even though Dagran is deceased in lore, and all dungeons quests were revised in the Cataclysm, and so was the Blackrock Depths, Emperor Dagran Thaurissan is still alive, and along with his wife are still the final boss of the instance (since the dungeon wasn't updated story-wise as was the Shadowfang Keep). The dungeon itself was tuned for lower level players, and so was the Emperor.

[Red Winter Hat] (during the Feast of Winter Veil)

After killing the Shadowforge Senate
Thank you for clearing out those foolish senators. Now prepare to meet your doom at the hands of Ragnaros' most powerful servant.

Aggro
I will crush you into little tiny pieces!

Killing a player
Hail to the king, baby!

The Story of Emperor Thaurissan