For historical information on how to defeat Rend in World of Warcraft, see Rend Blackhand (tactics). For the fel orc blademaster, see Rend (Warcraft III).

“We are the true Horde!”

Dal'rend Blackhand,[2][3] (or Dal'Rend) commonly known as Rend, was the bloodthirsty son of the former Warchief of the Horde, Blackhand the Destroyer, as well as the former Warchief of the Dark Horde. He believed that he was the rightful Warchief of the Horde due to lineage, and sought to overthrow Thrall. To this end, he allied the forces of the Dark Horde with Nefarian. The two used their combined resources to create the chromatic dragonflight, which they hoped to unleash upon the world. His mount was a massive chromatic drake named Gyth. Commanding legions of orcs, forest trolls, and ogres, along with backing from the black dragonflight, Rend was considered to be a great threat to Thrall's leadership of the Horde. He was eventually slain.

Rend and his brother and sister had a short childhood due to Warlocks aging of children, but unlike other Orc parents Blackhand was happy to put forward his children first for artificial aging.[4] After 'coming of age' Rend served with the other members of the Old Horde in the fight to exterminate the Draenei. After the Siege of Telmor, Durotan was offered the city as reward for leading the raid on it. When Durotan turned it down, Blackhand and his family were more than happy to take Telmor as their own, even going so far as wearing the clothes and sleeping in the beds of the Draenei they had killed.[5] This ended when the whole of the Orcish Horde was moved to Hellfire Citadel to better carry out the orders of Blackhand.[6] After this, Rend alongside Maim accompanied Blackhand into Blade's Edge, where an alliance of ogres and orcs was made. Eventually, both sons drank the blood of Mannoroth.

During the Second War, Rend served as lieutenant to Warchief Orgrim Doomhammer. He and his brother Maim often questioned Doomhammer's orders, as Orgrim killed Blackhand the Destroyer and took his place as Warchief but never disobeyed any order. However, Orgrim allowed the insubordination because the two brothers were leaders of the powerful Black Tooth Grin clan.[7] Later Rend and his brother were amongst the army who attacked Quel'Thalas.

During the siege of the Capital City of Lordaeron, Rend was ordered by Doomhammer to have his clan break off and chase after the traitorous Gul'dan, who had taken to the sea in search of the Eye of Sargeras.[8] He and his army battled against Cho'gall, but once they learned that Gul'dan had perished within the Tomb of Sargeras they returned to Doomhammer.

Rend and Maim later personally fought Turalyon at the Dark Portal, only to flee when it became evident that the paladin had the upper hand.[9] Rend and Maim took control of the remaining Blackrock orcs and began to rebuild the Horde at Blackrock Spire. 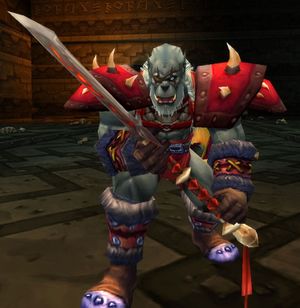 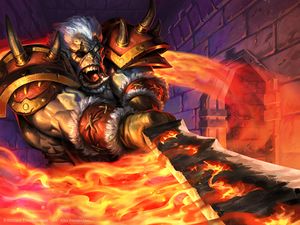 About two years later, the Dark Portal reopened and emissaries from Ner'zhul, led by Teron Gorefiend, were immediately sent to Rend and Maim asking them to rejoin the Horde, and to ask to borrow the red dragons held captive by the allied Dragonmaw clan. Rend only laughed and refused. Not only did he call Ner'zhul a coward for staying safe in Draenor while he fought the Alliance with Orgrim Doomhammer, but that Ner'zhul will fail in time. Unable to enter an agreement, Teron leaves the warchief to his bidding.[10]

Not long after, Nefarian, sent by Deathwing, came to Blackrock Spire and took control of the Blackhand brothers and the forces under their control.

Warchief Thrall demanded Rend's assassination with his head being brought back.[11]

Following the invasion of Outland, however, it was mentioned that the Blackrock orcs under Rend Blackhand were wreaking havoc beyond Grim Batol.[12]

After the Cataclysm, Rend was targeted by Acride who sent adventurers to kill him.[13]

History as told by Eitrigg

At the end of the Second War, Rend and his brother, Maim, fled to find sanctuary within the mountainous stronghold of Blackrock Spire. It was there that Rend declared himself Warchief of the weakened Blackrock clan.

Rend and his brother Maim ruled the Spire, in constant conflict with the Dark Iron dwarves. They managed to displace the dwarves in the upper portion of the city, but only after the dragons came and only after the death of Maim.[14]

In the canceled Warcraft Adventures, Rend and his brother Maim were the two who killed Thrall's father Durotan. They were traitors to their race, as they collaborated with the internment camps system for gold and favors. They paid a fortune for the gnomes to create the black ale which would keep the orcs pacified, and were about to make a blood pact in agreement to aid Lieutenant Blackmoore with the forces of their Black Tooth Grin clan. Thrall interrupted the meeting by setting the room ablaze, and Rend and Maim were trapped between the fires, confronted by the orc whose family they had murdered. Rend, reduced to begging, tried to claim he was forced to by his father, but Thrall failed to fall for Rend's lie, and used their blood mixed together to kill them with the Eternal Damnation spell, causing their flesh to melt and their souls being sent to hell for all eternity.

Rend was described as the brains of the two by Thrall, a description that still seems to apply in modern lore.

Dark Iron dwarves from Blackrock Depths swarmed up and tried to destroy the Dark Horde. The Dark Horde fought back, and Maim was killed in savage battle. His sacrifice, plus Rend's alliance with the Black Dragonflight, allowed them to drive back the Dark Irons and maintain their hold on Blackrock Spire.[15] 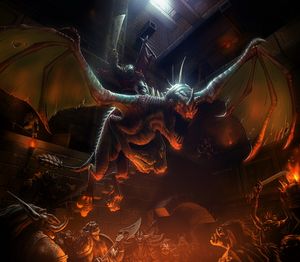