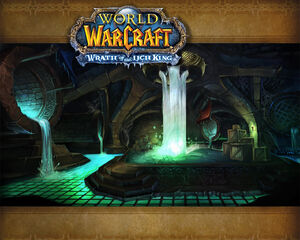 The Dalaran Arena is an arena located in the Underbelly of Dalaran in Northrend. An un-instanced version of the arena can be seen beneath the Circle of Wills, but it cannot be accessed by normal means.

Players start in pipes at the side of the central area. A little while after the match starts, water shoots both teams out as to prevent camping. The arena floor is formed as a square with a raised central area in the middle, opening possibilities for tactics including the use of Demonic Circle and knockback spells.

On the edges of the raised area, there are stairs leading up to it and crates that represent huts, which will offer persistent line of sight blocks. In the middle of the map there is a pipe coming down from the ceiling, from which water will randomly flow down, blocking line of sight.