Dalaran Citizens can be found walking around Dalaran. 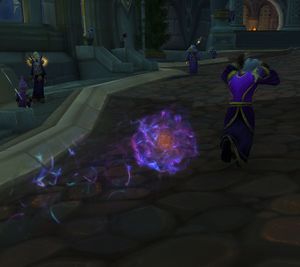 A citizen chased by Unstable Energy after the blink to Deadwind Pass.

Right after the Battle for the Broken Shore, Dalaran was hovering over Deadwind Pass and more particularly Karazhan.[1] The entire city had been moved by a giant Blink spell. Some Dalaran citizens were now suffering of dizziness and nausea, while others were re-materialized at the wrong place and were stuck in walls or in various other objects. Some of them were even fleeing because of unstable energy running amok in the city. Several recovery specialists such as Fanny Frizzlepop, Brilda and Grindle Dopplegink as well as the nurses at the First to Your Aid clinic were trying to fix their problems.

When Argus suddenly became visible in the sky, they were unsure what to make of it and understandably afraid as result. Some congregated around Kirin Tor Guardians in the hope of hearing any news regarding the strange occurrence, while others cautioned the young ones to stay indoors. Still others packed the First to Your Aid due to not feeling quite right, or hurried to the banks for withdrawals, while some even fell to terror.

Outside Tanks for Everything, to death knights with

[Maw of the Damned]
The skull on that axe looks... hungry.

-At the First to Your Aid clinic