This article is about the location where Dalaran once stood. For the city and its lore, see Dalaran. 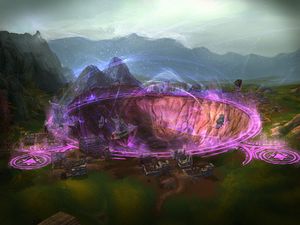 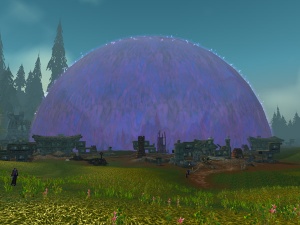 Dalaran in-game, prior to Wrath of the Lich King

Dalaran Crater is an area in the Hillsbrad Foothills located at the west end, on the shores of Lordamere Lake. It is north of Brazie Farmstead, the former Lordamere Internment Camp, and just east of Silverpine. It is a massive crater where the city of Dalaran once stood, which was destroyed during the Third War. The region was once patrolled by Dalaran wizards and their rock elemental minions, who were leveled in their mid-thirties. The NPCs that remain around the crater are friendly to the Alliance and hostile to the Horde.

Dalaran was originally represented in-game by a large purple dome with ruined buildings set up around and protruding from it. Players could not physically walk through the barrier, though hunters'

[Far Sight] could see the empty ground inside the dome where the city was supposed to be. Warlocks could also see inside if they summoned their Eye of Kilrogg while standing between one of the buildings and the dome.

When Dalaran was lifted off to fly over Northrend and aid adventurers in their fight against the Lich King, its former location in Alterac was dominated by this gaping crater. The magical dome remains, though nearly transparent and permitting entry. With some purplish haze around the site — possibly residue from the city's (literally) earth-shaking exit — it is an ethereal place.

For the most part, only workers and summoners remain at the crater as of Cataclysm. Arcane Remnants wander the area inside the crater, and Relios the Relic Keeper can be found outside. Archmage Ansirem Runeweaver of the Kirin Tor, previously seen roaming near the crater, is absent. Indigos can be found at the end of a prominent cliff, berating the mages there. Dialogue between the inhabitants of the crater reveal the area is unstable.

Horde players visit the area for the quests

[18] Relios the Relic Keeper and

[18] Practical Vengeance. During these quests, there will be a portal to the Sepulcher in the middle of the crater.

[Ancient Tome of Teleport: Dalaran], found in the Scarlet Halls instance, teaches Level 90 Mages how to teleport to the crater, and the

, teaches mages how to create a portal there - albeit high enough in the air to kill you (as is evident from the corpse of Crusader Jorny the Deified), though such fatalities can easily be avoided using abilities such as

With the second relocation of Dalaran, the Kirin Tor opens up Aegwynn's Gallery for adventurers where, among other portals, a portal to Dalaran Crater can be found.

As of the third invasion of the Burning Legion, the local forces of Dalaran are trying to reconstruct the remaining ruins, overseen by Archmage Cedric.[1]

Derek the Undying conducted a ritual here during the Blood War, and Alliance forces were sent to stop him.[2] High Sorcerer Andromath was also conducting a ritual, which the Horde was sent to stop.[3]