From Wowpedia
(Redirected from Dalaran Fountain)
Jump to: navigation, search

For the fishing artifact quest, see 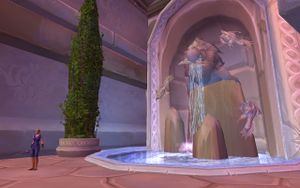 The Dalaran fountain, or Dalaran wishing well, is located in the Eventide district of Dalaran.[52, 65]

This is one of several locations within the city that can be fished. It is also one of the few objects that survived the wrath of Archimonde during the Burning Legion's razing of Dalaran in the Third War.[1]

This location is associated with four fishing achievements, the last being a meta-achievement for completing the first three. After completing

[The Coin Master], you also receive a

[Titanium Seal of Dalaran], a gold coin which you can flip into the air every 10 seconds.

World of Warcraft: Legion has its own achievement for fishing coins in the Broken Isles version of Dalaran.

All of the waters of Dalaran, including the fountain, require 425 skill to prevent fish from getting away. The fountain contains mostly

[Fountain Goldfish] and coins, although it also contains the normal Dalaran faire — albeit at a lowered rate then rest of the city. When you catch a gold coin, you can flip it back into the fountain giving you the Lucky buff, increasing your odds to catch another coin significantly.