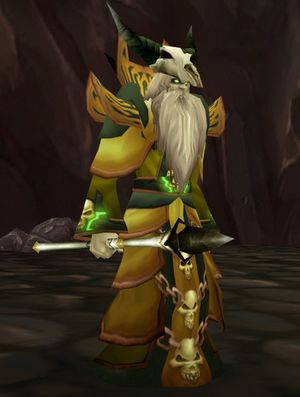 "Give yourself to the Scourge, and I promise you a painless and hasty transition into the unending service of the Lich King."

Dalronn the Controller is a necromancer boss in Utgarde Keep who accompanies the vrykul Skarvald the Constructor. Both of them will fight at the same time when aggroed.

It's a vrykul tradition to make unlikely partners work together. Some say it's to allow divergent abilities to complement each other; others say it's for the amusement of King Ymiron. Regardless, Skarvald and Dalronn are a perfect example of this custom. Between a vrykul's brawn and a human's necromantic arts, they will punish those who meddle with the Scourge.

Skarvald and Dalronn are very much the Romeo and Juliet fight in Karazhan. Both of them will fight at the same time when aggroed.

The kill order in this fight does not matter, however when one dies, a spirit version spawns which is untargetable and behaves exactly like it would when it was alive. This means they should both die at roughly the same time. The best strategy is to DPS Skarvald down to 10%, kill Dalronn, and then finish off Skarvald. This is because Skarvald will randomly charge players, and when his spirit spawns it will do the same, usually towards the healer. Since the spirit has no aggro table, he may stay on the healer until the fight finishes.

Grounding Totem can be employed even after he is untargetable to eat up his Shadow Bolts while you continue to burn down Skarvald.

Aggro
Skarvald the Constructor yells: Dalronn! See if you can muster the nerve to join my attack!
Dalronn the Controller yells: By all means, don't assess the situation, you halfwit! Just jump into the fray!

Killing a player
Dalronn the Controller yells: You may serve me yet.

Dalronn dies first
Dalronn the Controller yells: See... you... soon.
Skarvald the Constructor yells: Pagh! What sort of necromancer lets death stop him? I knew you were worthless!

Skarvald dies first
Skarvald the Constructor yells: Not... over... yet.
Dalronn the Controller yells: Skarvald, you incompetent slug! Return and make yourself useful!

TCG Scourgewar
Icecrown 5/220
"Give yourself to the Scourge, and I promise you a painless and hasty transition into the unending service of the Lich King."