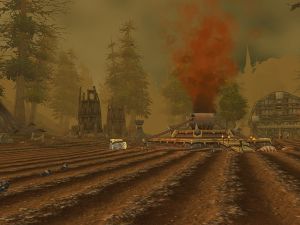 Dalson's Tears is an abandoned farm located in the middle of the Western Plaguelands. Formerly known as Dalson's Orchard,[1] the farm has been taken over by the Scourge. They have placed a large cauldron in the middle of the field which constantly spews disease-filled vapors into the air. The cauldron is guarded by Cauldron Lord Malvinious, Blighted Zombies, Rotting Cadavers, and Skeletal Terrors.

The unfortunate inhabitants of the farm still wander it in undeath. Mrs. Dalson now roams the property as a Wandering Skeleton, and once you read her diary, she can drop the key to the outhouse, where Farmer Dalson, now a terrible ghoul, is trapped. If one kills Farmer Dalson, he drops a key to a cabinet. The cabinet left in the farmhouse can be opened for a reward.

The Scourge have been cleared from Dalson's Tears, which has been renamed Dalson's Farm. The neutral hub of the Menders' Stead is nearby, run by the Cenarion Circle.[2]