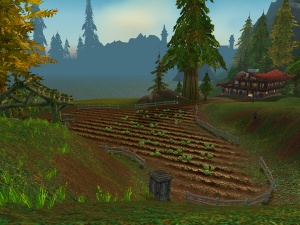 Dandred's Fold is a small farm and manor[1] on the westernmost side of the Uplands, in northwestern Alterac Mountains. Since it has a harbor on Lordamere Lake, it is also on the Misty Shore. Prior to the Cataclysm, Lord Aliden Perenolde, the last known leader of the Syndicate, her mistress Elysa, as well as some Syndicate members, and even the Argus Wake orc Nagaz, could be found here.

Horde adventurers were sent here to retrieve the necklace that had once belonged to Taretha Foxton, and end Aliden's life. After killing him, Aliden's mistress Elysa gave them the necklace, which she was wearing, in fear they would also harm her.[1][2]

Alliance adventurers were sent here by Magistrate Henry Maleb to kill the Argus Wake member Nagaz, which was allied with the Syndicate and could have been a potential threat.[3]

After Cataclysm, no quests take place here anymore and this area no longer serves any purpose.

The subject of this section was removed from World of Warcraft in patch 4.0.3 but is present in Classic.

Lord Aiden Perenolde, a high-ranking Syndicate member, resides within his keep in the Uplands and his home is considered the meeting place for the Alteraci nobles.[4]

This farm probably belonged to an Alteraci noble named Dandred, who lent it to Aliden as a safe house.