Dargrul the Underking is leader of the drogbar and the most powerful Underking since the age of Neltharion. Soon after the Burning Legion's arrival, Dargrul destroyed the peace between the tauren and the drogbar tribes of Highmountain by murdering High Chieftain Ulan and stealing the

[Hammer of Khaz'goroth], a powerful artifact protected by the tauren. Using the terrible power of the Hammer, the Underking intends to take control of Highmountain.[2] He serves as the main antagonist of the Highmountain storyline.

When the Burning Legion returned to Azeroth, Dargrul and a mysterious bodyguard convened a meeting at Thunder Totem with the tauren chieftains. As the Legion had begun marching on Dargrul's lands, the Underking was impatient and prickly, frustrated with the tauren's refusal to use the

[Hammer of Khaz'goroth] against the enemy. When the tauren sage Spiritwalker Ebonhorn revealed that the spirits of Neltharion's Vault had shown him that the Legion's fall would come at the hands of outsiders empowered by the hammer, Dargrul was outraged, saying that the tauren's ancestor had used the weapon to banish Deathwing from the region and that it therefore belonged to Highmountain alone. When Ebonhorn said that he was certain of what he had seen and that Highmountain's people were bound by fate to aid the outsiders, High Chieftain Ulan said that the Highmountain Tribe would obey the spirits, and the other chieftains begrudgingly agreed. In response, however, Dargrul claimed that he had also visited Neltharion's Vault but had seen nothing of outsiders — only that strength would drive back the Legion. Without warning, the Underking leapt forward and grabbed the hammer, saying that since the tauren were unworthy to wield it, he would do so himself. The Underking's hooded bodyguard used his magic to call forth great spikes from the earth which locked the three lesser chieftains in place. When Mayla, daughter of Ulan, said that Dargrul was starting war, he responded by saying that he was ending the war — that the Legion could not be reasoned with, that he knew the tauren would not act and that he would not let his people's fate rest in their hands any longer. When High Chieftain Ulan tried to stop Dargrul by saying that the drogbar relied on the tauren for food, the Underking replied that he would take all of Highmountain by force. He then used the hammer's power to instantly kill Ulan before fleeing, leaving the tauren tribes divided and weakened.[3]

This section contains information that needs to be cleaned up. Reason: Text is difficult to understand; the grammar needs extensive cleanup.

For centuries, the tauren and the drogbar tribes of Highmountain lived in peace. But soon after the Legion's arrival, a drogbar leader named Dargrul the Underking destroyed their unity and stole the

[Hammer of Khaz'goroth], a powerful artifact protected by the Highmountain tauren. Using the terrible power of the Hammer, the Underking intends to take control of Highmountain.[4] 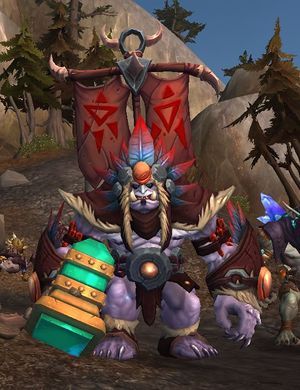 Dargrul in World of Warcraft wielding the

When Jale Rivermane and the adventurer are fighting Gelmogg, everyone turns into stone with the arrival of the Underking himself. He questions Gelmogg if he's having trouble then underestimated his worth. After he thought Gelmogg were victorious in the end, he wanted him to join the rest of the Drogbar in Riverbend. Jale quickly went to her village to tell everyone to evacuate with the Underking's arrival. Unfortunately, the power of the hammer did devastating damage to the village. After rescuing Jale, Warbrave Oro, and Oakin Ironbull, the confrontation of Dargrul was quickly approaching. Oro taunted the Underking only to be spiked in the end. His advisor Ularogg Cragshaper sees the stranger moving and lives. Dargrul wanted to let them know that their doom is at hand once he masters the titan's relic.

With all the tribes back in unity, they marched to Snowblind Mesa to end it all for good. Of course the Underking was prepared of an plan. First, he shaped a cave for himself to lure everyone when his army of stone failed. Then he taunts them and flees into the lair of the once proud great dragon. Within the dragon's lair, he questioned the champions that the tauren believed they were prophesied to seize the hammer. He taunted them to see one worthy of wielding the power of a titan. Dargrul the Underking couldn't believe it in the end that he was beaten and said that he was chosen only in the end that Spiritwalker Ebonhorn said that the hammer never chose him. To that end, it seeks a wielder who possesses true strength, and he was found lacking.