Lord Darius Crowley was once a Gilnean nobleman. A pro-Alliance figure, he dissented with King Genn Greymane's decision to separate his people with the Greymane Wall. Crowley led the Northgate Rebellion that caused a civil war in Gilneas, during which he was imprisoned. When Gilneas was attacked by worgen, he was freed and became a worgen himself. Both Crowley and Greymane reconciled and joined forces against the threats Gilneas faced. He now leads the Gilneas Liberation Front which fights against the Forsaken along with the Bloodfang Pack and the 7th Legion. When the Burning Legion returned to assault Azeroth, Darius and his daughter Lorna joined Genn on the Skyfire as part of his army forces.

At the time of the Second War, Lord Crowley was a nobleman whose lands and people were outside of the border that would later be known as the Greymane Wall. Despite being young and new to the Gilnean council of Lords, his humanistic and charismatic qualities made him loved by the Gilnean people and earned him the respect and friendship of the king of Gilneas, Genn Greymane. Crowley was one of the nobles that accompanied Greymane to Capital City to hear of Stormwind's fall and Anduin Lothar's warning about the invading Orcish Horde. Crowley was sympathetic to the Alliance's plight and advised Greymane to send aid to the newly-formed Alliance. Greymane agreed out of self-serving reasons but offered only token support.[1]

When Gilneas seceded from the Alliance, they created the Greymane Wall, a massive barrier that walled off his lands from the rest of Gilneas. Crowley opposed King Greymane's decision to abandon his people and later led the Northgate Rebellion, an uprising that resulted in a civil war. In retaliation for Greymane's decision to abandon the Alliance, it was Crowley that was responsible for sending the Gilneas Brigade to Jaina Proudmoore during the Third War.[1] He was eventually arrested on the grounds of treason and held at Stoneward Prison.

Darius Crowley as a human.

Shortly before the attack on Gilneas City, Genn was thinking about granting Crowley amnesty.[2] 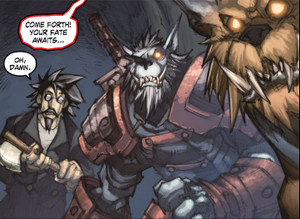 Darius Crowley in Curse of the Worgen Issue 5, standing with Halford Ramsey and a Feral Worgen.

When the capital of Gilneas was attacked by feral worgen, Crowley was released by Gilnean adventurers and convinced to give aid to Greymane, who had ordered the evacuation of Gilneas. When he and his released men regrouped, he gave them a speech of a union against the worgen. In order to divert the worgen's attention from the fleeing citizens, Crowley led a group of brave Gilneans to stand against them at Light's Dawn Cathedral. Crowley and his followers were overwhelmed, and became worgen themselves.[3]

When Belysra took Halford Ramsey to Tal'doren, he encountered Darius Crowley, one of many Gilneans that Belysra and her night elves had been trying to help with their worgen affliction. A Loyalist, Halford still thought of Darius as a rebel and a traitor and lunged at him but the fight was broken up by Belysra who reminded them that the past didn't matter anymore and that they both needed to put it behind them in order to preserve the future of Gilneas. Both agreed to put the past behind them and work together to capture feral worgen in the woods of the Blackwald and make them sane again and regain their humanity.[4]

He worked with the adventurer to retrieve the stolen Scythe of Elune from the hands of the Forsaken. He was worried of how Lorna would react to the news that he had the curse, but she was fine with it (considering that she had thought he had been killed instead). As the Forsaken invasion went on, Genn Greymane and Lord Godfrey traveled to Tal'doren to ask Crowley to help unite Gilneas against the Forsaken. Due to Lord Godfrey's prejudices towards the worgen, Darius was hesitant to accept. Greymane tells Darius that he is asking as an equal and after revealing that he too had succumbed to the Worgen curse, Darius agreed to join forces.[5]

Halford Ramsey along with Lord Crowley and his Gilnean worgen followed Belrysa Starbreeze in confronting Alpha Prime at Tal'doren. Belrysa attempted to use the Scythe of Elune to seal away Alpha Prime and his Wolf Cult beneath Daral'nir in the Emerald Dream, but before she could do so, a Forsaken dark ranger shot her in the arm. This caused her to drop the Scythe of Elune, and Alpha Prime signaled for the army of Forsaken to surround them. Alpha Prime took possession of the scythe, but just as he was about to finish Belysra off with it, the spirit wolf of Belysra's old lover — Arvell — killed Alpha Prime. With the death of their leader, the Wolf Cult scattered; leaving the Forsaken without their lupine allies and open to attack from the night elves and Gilneans. Shortly afterwards he, Halford and other Gilneans witnessed King Genn Greymane's confession of being afflicted with the worgen curse to his subjects and the Gilnean people's acceptance of him.[4]

[11] The Battle for Gilneas City with Genn and though they were successful in retaking the city, the Forsaken's Horde reinforcements and intent on using the Forsaken Blight forced the Gilneans to flee and seek sanctuary in Darnassus. Before the worgen left, he was present at Liam's funeral in Aderic's Repose and in Keel Harbor he led the organization of defenses against the invading Horde. While most of the worgen left, he and his daughter remained. 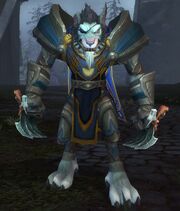 With Gilneas now in enemy hands following the Forsaken invasion, Lord Crowley led the Gilneas Liberation Front against the Forsaken in Silverpine Forest. With the Bloodfang pack and the Hillsbrad Worgen bolstering their numbers, and with help from the 7th Legion, who used a submarine to pass through enemy lines, the Alliance gained the upper hand in Gilneas. However, agents of the Horde ended up destroying some of the reinforcements and enabled the Forsaken to resurrect Lord Godfrey as one of their own,[6] a fact that none of the Gilneans were aware of.

With Godfrey's help the Forsaken successfully captured Darius's daughter Lorna.[7] Crowley led the Alliance's final push into Silverpine Forest. Sylvanas Windrunner herself rode out to meet with Darius at the shattered Greymane Wall and gave him two choices - the surrender of the Gilneas Liberation Front, or Lorna's death and resurrection as one of the Forsaken. Without a moment of hesitation, Darius agreed to surrender the Gilneas City in order to protect his daughter.[8] Sylvanas allowed them to retreat to Gilneas,[9] which was still contested between the Alliance and the Horde.

Darius and Tess present for the award ceremony of the player character.

Following the Battle for the Broken Shore, Darius and his daughter Lorna joined Genn Greymane on the Skyfire. He is seen standing next to Gilnean Footmen.

The Gilneas Brigade led by Genn and Darius' daughter Lorna established Greywatch to secure Stormheim from threats. Darius later made an appearance if an Alliance player reaches Prestige Rank 2, where he is found in Stormwind Keep alongside Princess Tess Greymane following the accepting of the quest, A Royal Audience. He was among the audience that congratulated the character for their battles against the Horde, following their receiving of the

[Grand Marshal's Medal of Valor] from Anduin Wrynn, as well as an artifact appearance.

Crowley was later found to have been taken captive by the naga on the Broken Shore alongside many other warriors. An Alliance warrior freed him, and he aided them in freeing the other warriors from the front. His counterpart for the Horde is Eitrigg. Notably, unlike Eitrigg who does not have this function, if the warrior frees any Forsaken, Crowley has a chance to run up and instantly kill them. If a pack of warriors is freed and he does this, any worgen freed will also cheer.

Crowley then joined the Valarjar as one of their followers, which also opened up recruitment for the 7th Legion; despite Crowley not being a part of this organization. It's possible this is just due to his place as a leader in the Alliance and prior working with the 7th Legion in Gilneas. He can be used as a bodyguard or support companion, which will cause him to appear and do an extremely large amount of damage in a wide AoE bladestorm.

Crowley has returned leading a renewed Gilnean army into the Forsaken controlled territory of Hillsbrad following the Battle for Lordaeron. He specifically marches against the Sludge Fields, which are amassing undead to assail Gilneas.[10][11]

Crowley followed his king when they were tasked into assaulting Orgrimmar's western gate while Anduin Wrynn and Varok Saurfang's forces assaulted the main gates. Due to the mak'gora between Sylvanas Windrunner and Saurfang, they did not assault the city.

He is also observed in various Horde quests in Silverpine Forest, which take place after the events of the worgen starting area.

Darius appears as a legendary card for the warrior class in the The Witchwood expansion for Hearthstone. His flavor text reads: "You either die a villain, or live long enough to see yourself become the hero."

Darius could be related to other people called Crowley besides his daughter Lorna.