Not to be confused with Animus or Saronite Animus.

Dark Animus is the ninth boss encounter in the Throne of Thunder, and the last in the Halls of Flesh-Shaping portion.

The Dark Animus was crafted by Archritualist Kelada, by the command of the Thunder King, as the perfect vessel to harness the great power of the anima. The construct is considered magnificent, sentient, and most importantly... deadly.[1]

During his reign, Lei Shen labored to build a mechanical servant that would defend his citadel without fear. When his first attempt failed, rage took hold of the Thunder King. He poured this negative emotion into his next, and most successful, creation: the Dark Animus. To this day, the ornate construct observes its duty, empowered by the mysterious substance at the heart of all mogu flesh-shaping experiments.

The mechanics of the Dark Animus encounter aren't quite like any boss fight we've done before. It centers around a fixed quantity of the mysterious swirling liquid, known as Anima, that is at the heart of the mogu experiments in this wing. The vital fluid animates golems, escaping and moving on to larger and larger constructs as the initial vessels are destroyed, until it eventually amasses enough volume to empower the Dark Animus itself, largest of all the golems. The encounter has a certain puzzle-solving element to it, and players will need to carefully manage how they shift around this finite quantity of Anima or the fight will quickly get out of hand.[2] 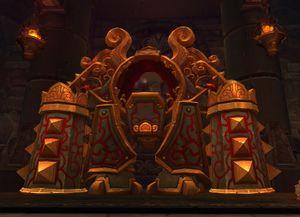 On the pull, all of the Anima Golems will have 4/4 Anima and will activate. The general idea is to move this Anima to as few adds as possible before activating the Dark Animus, then defeating it before it reaches 100 Anima (at which point Full Power will wipe the raid).

When the 12 non-damaged Anima Golems activate at the start of the fight, have the tanks pick up two each. All other raid members will pick up one. With the exception of the tanks, care must be taken to keep the Anima Golems apart from each other, as non-tanks will not be able to handle the damage increase from Acceleration Link (though tanks will have little difficulty with this).

The two tanks will pick a Critically Damaged Large Anima Golem, drag their adds over there, and have DPS kill them there. Two other pre-assigned raid members will take their adds to the third Critically Damaged Large Anima Golem (separately, because of Acceleration Link), and have DPS kill them there. DPS must take special care not to prematurely kill Anima Golems, otherwise Anima will likely jump to a non-desirable Golem.

Raid members affected by Anima Font must take care not to stand near other raid members. For Anima Ring, it is advised that a DPS or healer breaks the ring to allow the Dark Animus tank to escape without receiving the debuff; if the tank does receive the debuff, the tanks will have to swap the Dark Animus and Massive Anima Golem between them. Ranged and healers must simply stop casting when Interrupting Jolt goes off (healers should do their best to top up the raid in preparation).

When Dark Animus reaches 100 Anima, it will then channel FULL POWER which will very quickly wipe the raid (however, players will not be immediately killed). Raid members should use any damage reduction/immunity effects to try to finish him off.

Apart from this difference, proceed as per the 10 man version. Large Anima Golems should still not receive any Anima under any circumstance.

Dark Animus now activates immediately and starts with 52 Anima (for a total of 152 Anima distributed throughout the Golems). However, the raid is given a 2 minute grace period before it begins to cast Siphon Anima.

All abilities hit much harder, with Interrupting Jolt hitting for a significant percentage of the raid health. Anima Font will be cast as soon as the encounter begins (as Dark Animus begins with 52 Anima) and can one shot players who stand in it.

The Raid should do the same Strategy as Normal mode 90 secs after the encounter begun(since you don't want the massive golems to get empower stacks early) and proceed with it.

An alternative strategy consists of just zerg Dark animus while raid keeps the golems apart and move from anima front without stacking them.But this strategy requieres a huge deal of dps and is hard to perform(since it requieres ppl to still move from anima front and at same time not stack golems,which can be somewhat problematic,specially for 25Man),but is possible for raids Heavy overgearing the encounter.

Start by popping the orb with a ranged attack, then quickly run behind the boss and stand with the character's back to the wall. If creatures can get behind their target, they will ignore dodge and parry, so prevent this by standing back to the wall.

Pop all cooldowns and spam instants on the boss. High-level characters should be able to dodge and parry the melee swings of the small anima golems, but chracters stop dodging and parrying while casting any spells with a cast time.

In heroic mode, the Dark Animus starts attacking immediately, so focus all attacks on it!

Intro
Dark Ritualist yells: Stop them! The Animus must not be disturbed!

Aggro
Dark Ritualist yells: The power... It cannot be wielded this way! You tempt forces you do not understand!

Death
Dark Ritualist yells: You have doomed yourselves. It... is... unleashed.