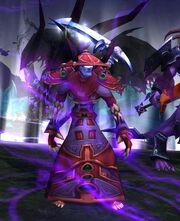 Example of an undead warlock with Dark Apotheosis, including the horns and demonic aura seen with a full Demonic Fury meter

Dark Apotheosis is a Demonology warlock spell, gained by choosing

This is a spell given to demonology warlocks who choose the

[Glyph of Demon Hunting]. As one of their main glyphs, it allows a warlock to indefinitely stay in a demon form and use most of the said abilities, including

[Hand of Gul'dan] unlike its more DPS-wise brother.

[Nether Plating] works in this form, the main purpose of this form is mainly for off-tanking in case the tank is killed and the creature is on its last legs but you need a tank. It gives you black and purple demon wings like those in Metamorphosis and once

[Demonic Fury] reaches a certain point it sprouts purple horns as well. Warlocks are incredibly well armored and a warlock using this can pick up the slack left by a dead tank. A skilled warlock who focuses their gear on this ability can tank normal dungeons and, to a limited extent, heroic dungeons as well, however due to the lack of a crit reduction ability, they are not viable for raids.

This does not increase your DPS so it is useless to use it unless you're off-tanking or leveling by yourself against a powerful creature. This also increases the threat of your abilities so if you use it in an instance it'll pull aggro from the tank, which might warrant a kick from the group. However, it is useful in the fact you don't constantly have to cycle between Metamorphosis and your mortal form when you use

In PvP this is likely very viable with the amount of defense it offers overall, and the utility of the abilities within. Demon leaping past your enemy on a hill, or using Sleep on another player to stun them for 8 seconds while you attack the other player. As well as the damage ward and AoE power it offers, it will bring use to warlocks in arenas and such.