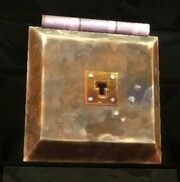 This page was created pre-TBC. The information is from a lvl 60 point of view and may be neither accurate nor relevant anymore.

The Dark Coffer is one of the major reasons high-level characters are still raiding Blackrock Depths. Basically, it is a chest with various valuable items including greens and gems.

However, the main reason to visit the safe is the

[Burning Essence], which is needed for the +20 Fire Resistance Libram Enchantment for your Head/Leg slot as you progress through the Molten Core. Casters may also want to get the

[Black Blood of the Tormented], for the +150 Mana enchantment.

Before you head off to BRD you should consider the following:

Getting to the Dark Coffer Room

After entering the Blackrock Depths, turn left and have the gate opened either by a rogue or with the Shadowforge Key. Kill or avoid the fire elemental, opening the next gate to the right. Unlock the door and enter the Shadowforge Lock room. Watch out for roaming fire elementals up the stairs. On top of the stairs run straight forward and enter the top level of the arena. With the arena event uncompleted, all spectators will aggro. However, they can be avoided by hugging the inner ledge while crossing the room. Tauren can also try to step upon the ledge to gain even more distance to the spectators.

Once on the other side, fight to the Coffer Room. Turn left and fight to the large Bridge (watch out for the "ambush event") and enter the Domicile. One can try to cross the room to the set of stairs to the left side in the back of the room without aggoing any mobs on the way, but most suggest taking the groups out regularly. Fight through the Domicile to a round-shaped room on a semi-circular ledge. Lord Incendius is below. The Dark Coffer room is beyond the next entrance along the ledge.

Go inside the room and clear any mobs. In the back is the Dark Coffer at the center of the wall (along with numerous Relic Coffers, openable for minor loot using Relic Coffer Keys). Be careful though, since the 4 golems will come to life and attack once all Relic Coffers are open.

So where is the Key ?

If you have come so far, you will stand in front of the Dark Coffer and have no idea of how to open it. The key is held by a Dark Keeper, which can be found inside the instance. However, he only spawns after you examine the picture which is located inside the Coffer Room (really hard to miss).

Once you examine the picture a Dark Keeper will spawn at a location which is pointed out within the text. However, the hints given are not very helpful for people who don't know the Blackrock Depths that well, so here are the different locations of the possible Keeper spawns:

Once you have killed the Keeper, loot the Key and return to the Coffer Room to open the Dark Coffer. One of the most desirable items the coffer has been found to contain is one or two