Dark Inquisitor Xanesh is a human boss in Ny'alotha, the Waking City.

She is also found by the adventurer and Wrathion in the Vault of the Shadowflame in Blackwing Descent where she intended to revive Nefarian's experiments and use Wrathion's essence to resurrect Nefarian and Onyxia to serve N'Zoth. However, she was thwarted in this and retreated to Ny'alotha.[1] Within Ny'alotha she tortured Queen Azshara for betraying N'Zoth until she was slain by Wrathion and Azeroth's champions.

Few can resist the whispers of the Old Gods, but those who do find themselves at the “mercy” of Dark Inquisitor Xanesh. A cruel and sadistic torturer, Xanesh prides herself on slowly carving the sanity away from those in her charge until all that remains is unwavering devotion to N'Zoth.

Xanesh summons power from the Void to torment players and Queen Azshara. Participate in Xanesh's [Void Ritual] to gain the ability to eliminate [Void Orbs] summoned during the encounter. 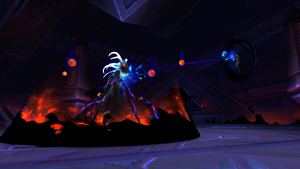 The inquisitor torturing the queen.

Xanesh becomes attackable
Your cries shall echo for eternity!

Aggro
I'll pry the screams from your flesh!

Void Ritual
The Void is mine to command!

Void Orb created
Queen Azshara yells: Do not allow the Void near me! 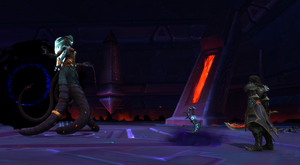 Azshara breaks free of her bonds while Wrathion walks into the chamber.
Wrathion says: We fulfilled our end of the bargain, Azshara. Now honor yours.
Queen Azshara says: Mind your tone, whelpling. A queen keeps her promises. Listen closely, as I will only say this once.
Queen Azshara says: For all his bluster, N'Zoth was ever the weakest of his kin. One vestige of their power yet remains that can be turned against him.
Azshara summons Xal'atath and throws it at Wrathion's feet.
Queen Azshara says: I would have driven this blade into his foul heart myself... had you not disrupted my plans.
Queen Azshara says: No matter. Xal'atath is yours, mortals. Strike true. Should your first blow fail, you will not survive to attempt another.
Queen Azshara says: Now go and do what you will. I tire of intermediaries and heralds. The true throne of power beckons, and I intend to claim it.
Azshara opens a Void portal behind her and disappears through it.
Wrathion says: Azshara has a fondness for games. I will examine this dagger for signs of treachery. But for now, let us continue.

There are few who can resist N'Zoth's whispers, but those who do are doomed to fall under Dark Inquisitor Xanesh's wrath. A mastermind of torture, Xanesh prides herself on slowly peeling the sanity from of her victims until they have been carved into true worshippers of the Black Empire.