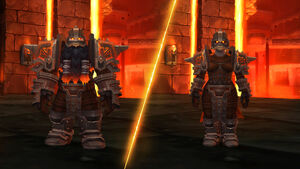 The Dark Iron dwarves,[2][3] also spelled as dark iron dwarves[4] and known as dark dwarves[5] are a sub-race of dwarves at par with hill, mountain and frost dwarves.[5] Though the majority of them are members of the Dark Iron clan, many are also members of independent organizations such as the Twilight's Hammer, Thorium Brotherhood, Venture Company, and Mountain-Lord Rendan's followers.

Some dwarves from the Dark Iron clan became the cursed skardyn that roam Grim Batol after the War of the Three Hammers.[6]

In World of Warcraft, Dark Iron dwarves have darkish gray or black skin, with red glowing eyes. As of Battle for Azeroth, their hair glows slightly and embers flake off the ends.

Dark Iron dwarves are known for being manipulative, underhanded, greedy, cruel, and despotic but Franclorn Forgewright states that they were not always that way and that these evil traits may have been caused by the influence of Ragnaros.[8] This may be true as certain individuals such as General Angerforge, Franclorn Forgewright, and the Thorium Brotherhood have shown themselves to be stalwart, valorous, and even honorable; despite their history of strife with the other dwarven clans and even among themselves. Predominantly, Dark Iron dwarves are known for their fiery tempers and fierce determination.[9]

Dark Iron politics is both treacherous and brutal. There is only one punishment for crimes committed against the Dark Iron dwarves: death. Ancient tradition calls for the guilty to pay the blood price in the Ring of the Law by battling savage creatures gathered from across Azeroth. To date, it is unknown if anyone has ever survived this brutal crucible. Dark Iron dwarves are also known for their craftsmanship, their sorcery, and their sturdy architecture.

Dark Irons have a habit of bringing their own food and drink with them when traveling. This developed from the fact that among their clan, poisoning is not uncommon. A host should not take offense, as it's not meant to be a slight against them.[10]

Dark Iron dwarves need a lot of rest and they have a hard time sleeping without pillows.[11] 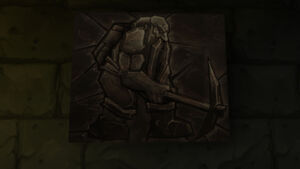 Additionally, the skardyn are a race of cursed descendants of Dark Iron dwarves from below Grim Batol. 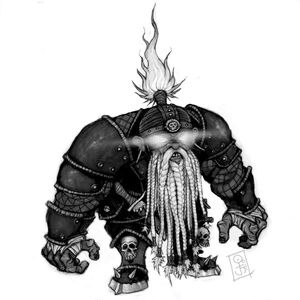 A Dark Iron dwarf in Lands of Conflict.

Dark Iron dwarves easily stand out from the other two clans. They physically resemble Bronzebeard dwarves, but they are less stocky and more dexterous. Their skin is pale white to sickly gray, and their hair and beards are white, black, or orange. Their eyes glow with orange flame - one of many gifts from their fiery master, Ragnaros.[16]

Once, long ago, three clans lived in Ironforge peacefully. The Wildhammer faction was drawn to the foothills and crags around the base of the mountain, while Bronzebeard dwarves chose to mine the mountain itself. The Dark Irons became fascinated with the mountains’ depths, where fire and brimstone simmer. Here they discovered dark iron, as well as forged a connection with the magma below. They also gained an unnatural obsession with arcane magic, and many had at least some training in spellcasting. Some say whatever they discovered below eventually corrupted the race.

Two combined armies marched south, intent on destroying Thaurissan once and for all. However, their thane had other ideas. The mad king still believed he could win, and sent out powerful magics, seeking something powerful enough to wipe out both armies. Ruled by fear, Thaurissan didn’t know what he was getting himself into when his spell found something far worse than defeat in the war.

In his self-empowering madness, Thaurissan freed Ragnaros the greatest fire elemental ever from his prison who was long ago imprisoned by the titans. His eruption into the world destroyed 80% of the Redridge Mountain range, and nestled in the middle of the devastation rose the great volcano now known as Blackrock Mountain. The Searing Gorge bordered it to the north, while the Burning Steppes, formerly lush and beautiful but now destroyed, formed in the south. Ragnaros’s rebirth killed Thaurissan and destroyed his city. His kin, however, survived, and to this day they live within Blackrock Depths, in servitude to Ragnaros and his elemental minions.

Other dwarves long thought that the Dark Irons were destroyed when the spell that summoned Ragnaros destroyed much of the range. However, it wasn’t to be. To this day they pay for Thaurissan’s colossal mistake by serving Ragnaros in his armies. Their lives revolve around Ragnaros’s will.[17]

Dark Iron dwarves avoid straight combat, preferring ambushes and ranged assaults. Dark Irons are self-serving, with little of the clan loyalty so dominant in the other two dwarven clans. A Dark Iron willingly flees or betrays his allies in order to save his own life.[16]

Dark Iron dwarves speak Common and Dwarven. Dark Iron dwarves sometimes learn Goblin and Low Common to speak with the creatures around their territory, and their elemental masters teach some of them their ancient language, Kalimag.[18] 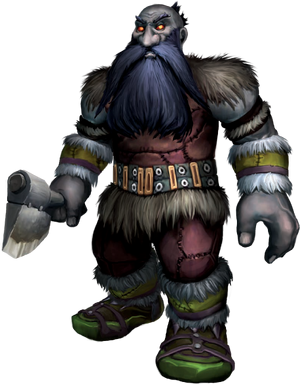 In the Monster Guide.

Like most dwarves, Dark Iron dwarves follow a rigid and militarized organization. Every Dark Iron dwarf soldier is well trained and well-armed, often with the finest equipment he can afford. However, the years under the dirt, as well as a diabolical outlook on life, change the Dark Irons’ tactics. Skullduggery and backstabbing are just as potent as a good line formation. Even better, in some cases.

Dark Iron dwarves are cunning, and quicker than other dwarves. Whereas a unit of Bronzebeard dwarves would march straight into enemy lines, Dark Iron dwarves prefer setting up ambushes, or sending lightning-fast strikes. Dark Iron dwarves grew comfortable in the shadows over the many years of their exile and enslavement, and are not above petty tricks such as traps and assassination.

Most Dark Iron dwarves form smaller units than their Bronzebeard cousins, to spread their numbers and allow for flanking and pincer maneuvers. Rogues and assassins mix evenly with warriors and marksmen.

Dark Iron dwarves are also well versed in arcane magic, more so than any other dwarven race. Due to untold years of living next to molten lava and fire, the Dark Iron clan developed a strong link to flames and fire magic. Fire-aligned elementalists battle alongside elite marksmen and stealthy skulkers, raining death on Blackrock Depths’ enemies. Battles against Dark Iron dwarves are often hellish, taxing both sides as the Dark Iron elementalists grow overzealous.

Dark Iron dwarves have unconventional backup as well. Fire elementals, servants of Ragnaros, appear intermittently with dwarven forces. Unlike the dwarves, fire elementals have no care for the art of subtlety. Lava elementals and flamewakers roar through battle, burning anything that gets in their way.[19]