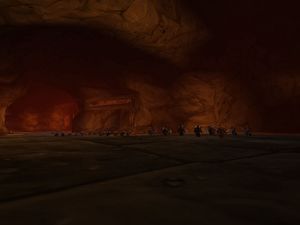 The Dark Iron Highway is located inside Blackrock Depths of Blackrock Mountain. This long stretch of wide pavement is located directly north of the entrance and is guarded by patrols of dwarves, bloodhounds, and the occasional Fire elemental. Access to the highway from the entrance is provided by gates that no longer require keys to open.

At the road's western end stands the molten giant Bael'Gar. Behind Bael'Gar stands a pair of doors that cannot be opened. What is behind those doors is unknown. Another pair of doors are located at the northeastern end of the road, with the East and West Garrisons overlooking the approach to those doors. The eastern door of this pair is slightly ajar when players first enter the instance. That position allow the players to pass through the doors and access Shadowforge City and specifically the Black Anvil and Lord Incendius via the road. However, the open door position prevents travel across the road via passages built inside the doors. To travel from the East Garrison to the West Garrison, the players must first close the eastern door by activating a mechanism located in the East Garrison. Closing the door brings the passages inside the doors into alignment. There is no known way to reopen either door once the mechanism is activated.